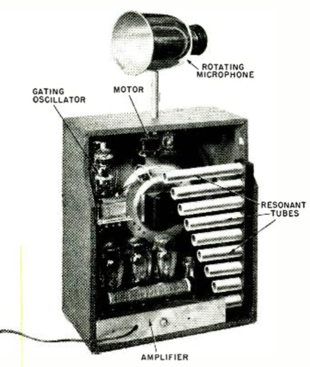 The Noise Neutralizer (1952)
Radio-Electronics published its annual April Fool article by Mohammed Ulysses Fips, in which Fips described his invention of a device that eliminated all noise by means of "dead-beat heterodyne." He explained:

"Sounds are relayed electrically to our electronic noise eliminator and are amplified by means of special electronic circuits. Then they are fed into a special differential oscillator. The machine now emits the identical sounds or noises it hears, at the exact frequencies and intensities. The result is a dead-beat heterodyne. This causes total sound interference. The result is absence of all sound — a dead quiet."

Unfortunately, Fips's boss smashed the device because it made it impossible for people in the office to hear each other talk. 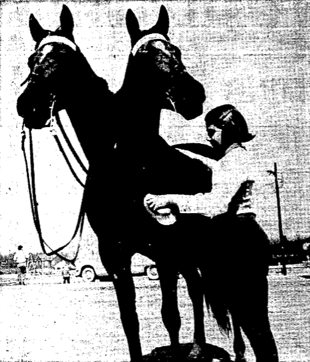 Two-Headed Horse (1952) "This horse has been shown throughout the world to millions in order to convince them that a two-headed horse exists. It will participate in the Alamance Saddle Club horse show on April 26. Miss McLeod believes two heads are better than one because in some previous close races, Ichabod has been able to turn one head to watch the opposition from behind while his other head is turned forward to keep pace with the horses ahead." [The Burlington (N.C.) Daily Times-News - Apr 1, 1952] 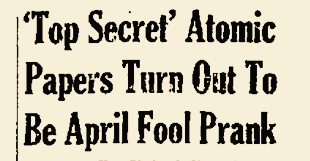 Top Secret Atomic Papers (1952) Two teenage boys walked into a London police station and handed over a folder that appeared to contain designs for an atomic weapon. They said they had found it lying on the pavement at a bus stop. Word of the disturbing discovery soon went public, causing widespread alarm. The apparent security breach was even discussed in the House of Commons. But when atomic experts got around to examining the formulae and blueprints, they concluded they were meaningless.

The mystery was solved when a friend of the two boys confessed he had created the "top secret" documents himself out of Norwegian billhead receipts and pieces of an old blueprint he had taken from the office where he worked. He wrote "a lot of gibberish" on the papers, put them in a folder, and showed it to his friends, claiming he had found it lying in the street. 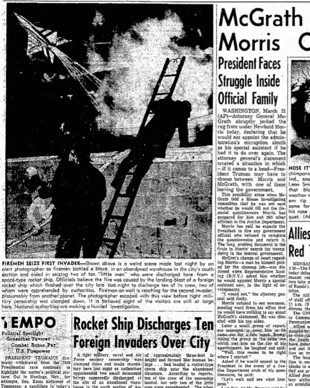 Aliens Invade Anderson (1952)
The Anderson Herald (Anderson, Indiana) reported on its front page that ten "little men" had disembarked from a "space-type rocket ship" in the south section of the city. The landing blast of their ship had caused an abandoned warehouse to catch fire. Two of the little men had been caught and were being sent to secret laboratories for examination, but the eight other men were still at large. 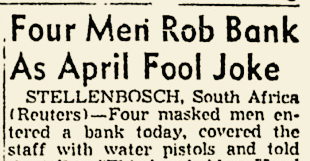 Prank Robbery (1952) In Stellenbosch, South Africa, four masked men entered a bank, aimed water pistols at the staff, and declared, "This is a holdup. Hand over the cash."

The terrified teller handed over the money. The alarm went off. Then the men threw the cash back, shouted "April Fool" and fled the scene in a car. 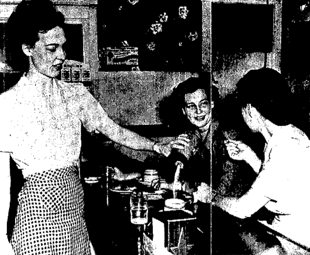 Spice of Life (1952) "Lenore Carter, waitress in a downtown cafe, decides to have some fun with an unsuspecting customer, Pat Inge (right), by pouring salt into Pat's coffee while the latter is conversing with a smirking companion, Lorine Rundle. Lenore's act was all in fun, though, as today is April Fool's Day. Photographer Chuck Sundquist didn't hang around to see how Pat enjoyed the 'fun.'" [Long Beach Press-Telegram - Apr 1, 1952]
General Categories
Regions
Recurring
Settings
Perpetrators
Organizations