The Origin of April Fool’s Day? (1983) Joseph Boskin, a History professor at Boston University, was interviewed by Associated Press writer Fred Bayles about the history and meaning of April Fool's Day. During the interview, Boskin stated that April Fool's Day originated during the Roman Empire when a group of fools and jesters boasted to Emperor Constantine that any one of them could rule the kingdom as well as or better than the Emperor himself. Amused, Constantine gave them a chance to prove this boast by appointing Kugel, the King of the Fools, emperor for a day. Kugel immediately decreed that only the absurd would be allowed in the kingdom on that day. The custom stuck, and therefore the tradition of April Fools was born.

Bayles's interview with Boskin appeared in newspapers throughout the country. But what Bayles hadn't realized was that the story about the origin of April Fool's Day wasn't true. Boskin had made it up as a joke.

Several weeks later, Boskin confessed to his hoax. Kugel was, in reality, a kind of Jewish casserole, not the King of the Fools. He also admitted that he didn't actually know how April Fool's Day began.

Fondue Hot Springs (1983) NPR's All Things Considered ran a segment about the threat of extinction facing the Vince Lombardi Fondue Springs, the "last surviving spring of natural fondue cheese in the United States," located in the fondue country of northern Wisconsin.

For years the fondue springs had been a "point of pilgrimage for cheese communicants." But now, the Cheese Watch Society warned, the Fondue Pocket was reducing. The society recommended "a highly trained force of cheese rangers to control visitors to the fondue pocket using sniffer dogs." If steps weren't taken, the society warned, the cheese would soon be gone. 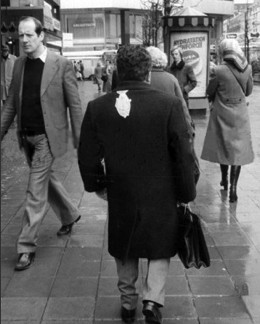 Paper Fish (1983) A pedestrian on a street in Brussels fell victim to the old prank of a paper fish stuck to his back. In French-speaking countries, tagging someone as a "poisson d'Avril" (April Fish) is the equivalent of calling them an April Fool. 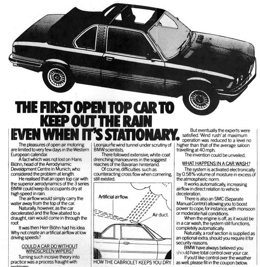 Rain-Deflecting Open Top Car (1983) BMW revealed that one of its engineers, Herr Blöhn, had developed a sunroof that could be kept open even in the rain, thanks to jets of air that blasted the water away from the top of the car. The system worked completely automatically, even in a car wash.

Those seeking more information were directed to query "Miss April Wurst" in the BMW marketing department. 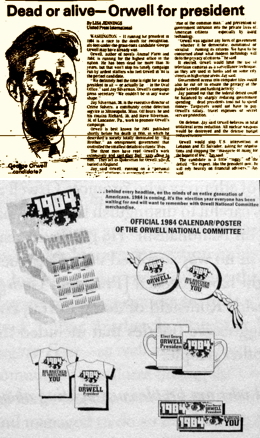 George Orwell For President (1983) Three men, who identified themselves as Richard Silverman, Steven Silverman, and Jay Silverman, held a press conference at Washington's Mayflower Hotel at which they announced George Orwell's candidacy for the 1984 presidential election. They said, "We intend to use the Orwell candidacy as an avenue for humor during the long presidential election process. April Fool's Day seems an appropriate date to announce Orwell's candidacy." George Orwell died in 1950.
General Categories
Regions
Recurring
Settings
Perpetrators
Organizations