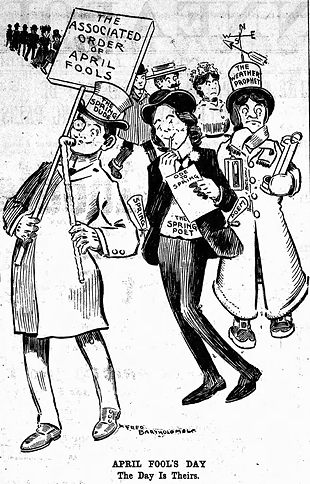 The Associated Order of April Fools (1903) Cartoon by Fred Bartholomew, published in the Minneapolis Journal - Apr 1, 1903. 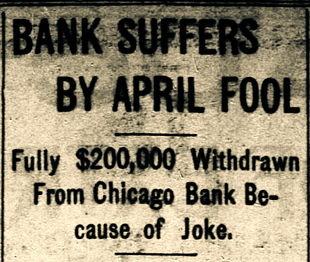 Run on Bank (1903) On April 2, almost half the depositors of the Chicago bank of Kaspar & Karel lined up outside its front door, demanding to withdraw their money. The mass withdrawal of funds, almost $200,000 by the end of the day (all that the bank had on hand), nearly caused the institution's collapse. The cause of the run was traced to a false rumor that had circulated the day before alleging that the bank was in serious financial difficulty. Exactly who started the rumor isn't clear, but it apparently had been intended as an April Fool prank. Some sources claim that the rumor was begun by a milkman who had jokingly told a woman on his route that Kaspar's was closing, knowing that the woman had funds in the bank. 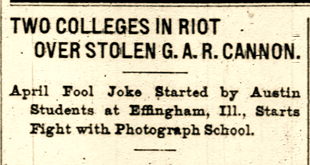 April Fool Riot (1903) On the night before April 1, students from Austin College stole a Union Army cannon from the campus of the neighboring Illinois College of Photography. In response, the students of the photography school marched on Austin College the next day, demanding their cannon back. The young women of the school marched at the front. But the Austin students turned out en masse to defend their stolen treasure, and a fight ensued, during which a number of students were seriously injured.
General Categories
Regions
Recurring
Settings
Perpetrators
Organizations