Bedford Bypass Airlift (1969) "A helicopter airlift has been initiated to carry slow moving vehicles over the Bedford Bypass Detour. Two pick-up points, one along Sunnyside Road and the other along Mile Level, have been established. The air lift will be limited to daylight hours. Those who desire to view the operation should first check their calendar."
[Bedford Gazette - Apr 1, 1969]

"The footprints were evidently made Sunday when what is described as a wild-eyed, scaly animal crashed through a row of hedges lining the south-side of the lake. 'Definitely prehistoric' was the explanation of one official, blanching at the first sight of the weird prints." 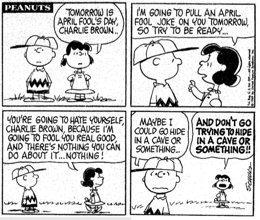 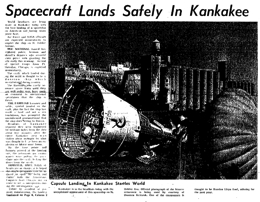 Soviets Land in Kankakee (1969) The Daily Journal, based in Kankakee, Illinois, reported that a Soviet space capsule had landed just outside of the city. Apparently the cosmonauts had seriously miscalculated their trajectory during reentry. The Soviet government was said to be keeping its silence about the capsule. An accompanying photograph showed a space capsule with a hammer and sickle displayed on its side. The article said that one of the cosmonauts, Lirpa Loof, had been missing for over a year. Many people drove to the supposed site of the landing to see the capsule.
General Categories
Regions
Recurring
Settings
Perpetrators
Organizations