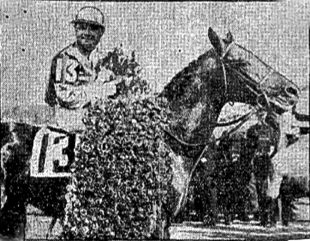 Babe Ruth Turns Jockey (1930) "WILLACOOCHE, Ga., April 1. — Babe Ruth, the big Bambino of the Yanks, revealed here today that he has lost so much weight by intensive spring training that he has been forced to give up his career as a baseball player and become a jockey.

Ruth, who formerly could cover more ground than any outfielder in the American League—also while sitting down—now tips the beam at a mere 108 pounds. If he fails as a jockey, he may seek the flyweight boxing championship." 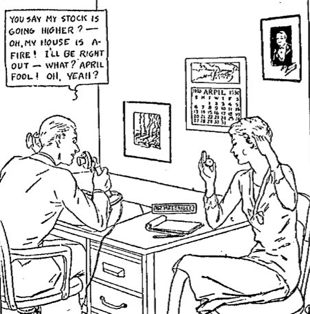 April Fool Errorgram (1930)
"There are at least four mistakes in the above picture. They may pertain to grammar, history, etiquette, drawing or whatnot. See if you can find them." (click on image for answer) 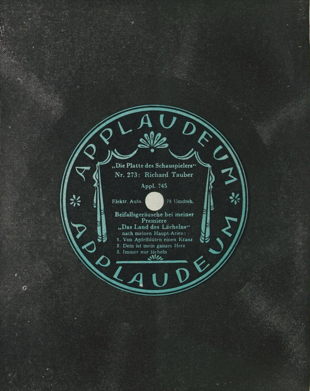 Applaudeum Records (1930) The German magazine Uhu reported about a new innovation in the recording industry: records that preserved only the applause at performances. They were being made available by the recording company "Applaudeum." The recordings were made possible by a device that was "designed to automatically turn on at the slightest sound of clapping." The applause records were said to be in great demand not only by beginners who hoped to use them as a way to get new engagements (by showing directors how well appreciated their performances were), but also by prominent artists. The illustration showed the applause record of a performance by the famous tenor Richard Tauber. 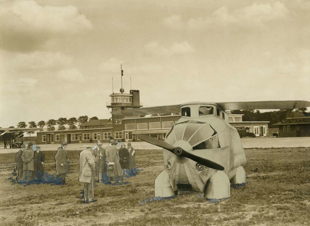 The Flying Monster (circa 1930) The Dutch magazine Het Leven ran a photo showing an experimental aircraft known as the "Flying Monster" designed by a Polish airman, Raketzki. It was said to have two floors, with space for 20 people. The image was actually a photomontage. The background showed Amsterdam's Schiphol airport. 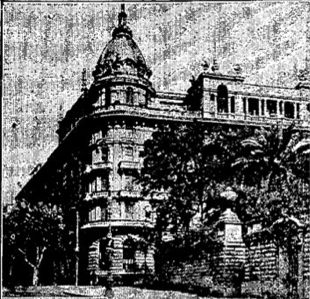 Thai Menam Bey (1930) Over a thousand cards were sent to notables throughout Rome, including dowagers, diplomats, and society folks, inviting them to the Excelsior hotel (shown) to listen to the Turkish savant "Thai Menam Bey" who would explain how he had arrived at the impressive age of 205.

Traffic became so heavy around the hotel that extra policemen were needed to keep order.

Rubber-Clad Pickerel (1930) "The Waterbury Republican Tuesday printed a story of a rubber-clad pickerel. It seems that two years ago Lester [Green]'s son lost a toy balloon in a pond near his home. An infant pickerel apparently made his home in it. The casing, the story went on to say, saved the fish from the necessity of growing scales."