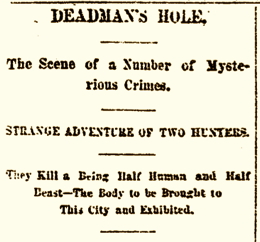 The Monster of Deadman’s Hole (1888) The San Diego Union reported that two hunters had killed a bizarre, half-human half-animal beast in an out-of-the-way location called Deadman's Hole northwest of San Diego. The creature was said to have the body of a bear, but stood upright like a man and had a human face. The hunters were reportedly bringing the body into the city for public exhibit.

The next day the paper boasted, "throughout the day the police station was visited by a number of persons who were anxious to view the body of the strange being that was reported killed. They were told to come in next April Fool's day and see it."
General Categories
Regions
Recurring
Settings
Perpetrators
Organizations