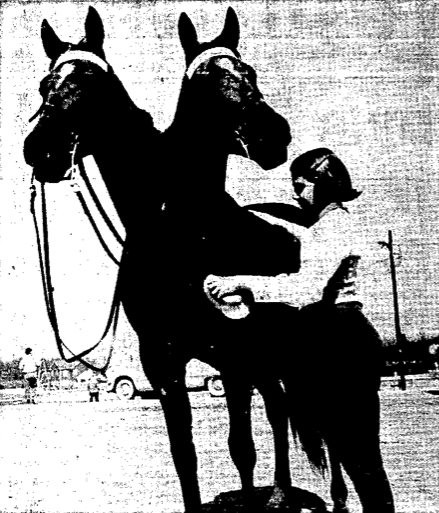 "Two heads are better than one, according to Miss Carolyn McLeon, of Elon College, as she rubs down her horse, called "Ichabod." This horse has been shown throughout the world to millions in order to convince them that a two-headed horse exists. It will participate in the Alamance Saddle Club horse show on April 26. Miss McLeod believes two heads are better than one because in some previous close races, Ichabod has been able to turn one head to watch the opposition from behind while his other head is turned forward to keep pace with the horses ahead. He has won several close races by a nose or two. This particular horse is a thoroughbred production of his sire, the famous "Graflex" and his mother, the internationally known "April Fool." Don't be surprised, however, if one of the heads is missing when the horse show comes along. It won't be April Fool's Day then. [The Burlington (N.C.) Daily Times-News - Apr 1, 1952]
April Fool's Day Hoaxes Involving Animals April Fool's Day, 1952 April Fool's Day Photo Hoaxes
Tweet