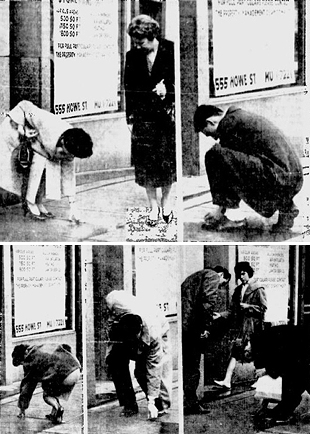 A Vancouver Sun photographer welded a 50 cent piece to a spike and hammered it into the pavement. Many tried and failed to pick it up, until one man pried it up using a knife of the type used to dig stones from horses' hooves. [Vancouver Sunday Sun - Apr 1, 1961] More… 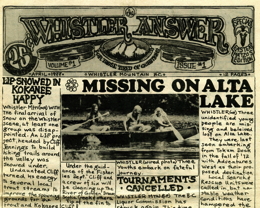 The first edition of The Whistler Answer (of Whistler, British Columbia) was published, featuring a front-page story about three naked canoeists "Missing on Alta Lake." Alta Lake was frozen at the time.

The Whistler Answer was a mostly hand-drawn, hand-lettered counterculture paper — "the expression of the ski bum population of Whistler in its early days as a ski resort. [Whistler Museum] More…

She hoped eventually to expand her business to include gerbils as well. [listen to the broadcast] More…

Frank Jones, of the Toronto Star, reported that radiation leaking into Lake Ontario was causing prehistoric creatures to crawl up out of the lake and onto the shores of Ward’s Island. More… 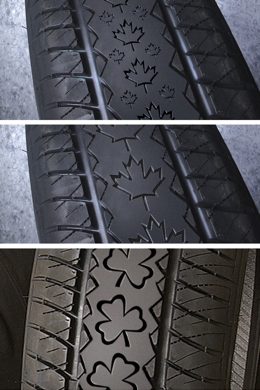 "For hundreds of years people have been monogramming their clothes, and there's certainly no shortage of personalized license plates, so why shouldn't they be able to add a personal touch to their tires too?' said Ian McIntosh, General Manager of Advertising & Marketing Services, Dunlop Tires (Canada)...

Dunlop Ident-a-Treds are the product of more than a decade of top-secret work at the company's remote Canadian research and development facility in Serit Polnud, NWT. Researchers at the Serit Polnud lab created the new, ultra malleable and highly adhesive tires by combining sticky sap from Canadian maple trees with traditional rubber compounds. Dunlop Ident-a-Tred tires are available with initials, symbols, designs or logos engraved onto the tire treads, combining superior traction and handling with unique style." More… 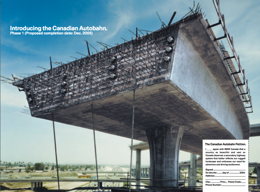 BMW Canada ran an ad urging Canadians to petition their local Member of Parliament to support the creation of a Canadian Autobahn. This roadway would be an "auxiliary highway system that links the Atlantic and Pacific oceans in a manner that benefits high-performance automobiles." BMW Canada revealed that it had already surveyed the country to determine where such an Autobahn might best be placed. 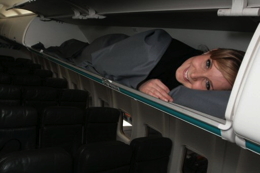 Canadian airline WestJet announced it would be converting overhead luggage compartments on its planes into sleeper cabins: