Atmospheric Energy Harnessed (1923) The Deutsche Allgemeine Zeitung reported that a Russian scientist, Professor Figu Posakoff, had discovered a method of "harnessing the latent energy of the atmosphere," the energy displayed in thunderstorms and other atmospheric catastrophes. Harnessing this energy would allow the Soviets to hurl objects "of any weight almost unlimited distances."

The Soviets were said to have promised to use this discovery only for peaceful purposes. However the Allgemeine Zeitung noted that it would certainly give the nation a powerful advantage in warfare.

The New York Times ran the story on its front page on April 3, having failed to realize that it was a joke.
Mummies found in Berlin underground (1923) A Berlin newspaper reported that a large find of mummies and Egyptian antiquities had been unearthed during the excavation of an extension of the city's underground railway. The paper quoted an expert, Dr. Lirpa, who said that the find rivaled Tutankhamen's tomb and indicated "the presence of an Egyptian colony in Germany in prehistoric times."

(Archaeologist Howard Carter, shown in the picture, had recently — on Feb. 16, 1923 — opened the burial chamber of Tutankhamen.)
The Passing of April Fool (1923) The Yuma Sun noted that only a single New York newspaper perpetrated an April fool joke — "an Italian-language journal announcing the arrival of d'Annunzio in this country incognito." From this, it concluded that April foolishness was on the decline in America:

"Americans have an old reputation as practical jokers, but they appear to have outgrown this particular form of hoax. Have they put it aside with other childish things of an undeveloped civilization?... At any rate, for Americans at least, April-fool jokes seem to have passed out of popular favor. They have gone the way of other frivolities of the P.T. Barnum state of Yankee civilization." [The Yuma Sun — Apr 14, 1923]

(April Fool's Day and Easter fell on the same day in 1923, which may offer another explanation of the lack of April fools in New York papers that year.) 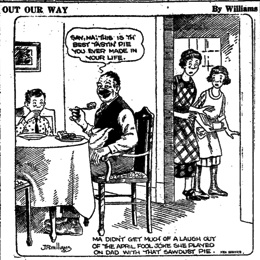 Sawdust Pie (1923) "Ma didn't get much of a laugh out of the april fool joke she played on dad with that sawdust pie." 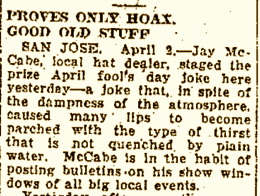 No Booze (1923) San Jose hat dealer Jay McCabe posted a sign in his window announcing that a truckload of booze had fallen into the Coyote creek at the Julian Street bridge, and that the driver had fled. Scores of people drove to the location, found no truck, and then remembered what day it was.

(This was during the Prohibition Era, so a truckload of booze would have been a particularly tempting attraction.)
Fire alarm pulled (1923) The Newburyport fire department responded to an alarm from the business district, but upon arrival found no fire. Police interviewed men standing near the alarm box who swore it hadn't been pulled.

But soon after the fire engine returned to the station, the telephone rang. The caller said, "April fool," and then hung up. [Portsmouth Herald — Apr 2, 1923] 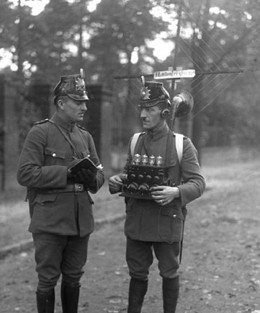 German police receive new radio equipment (1923) German police officers demonstrated the new radio receivers they would be equipped with, to help them stay in touch with headquarters and receive reports about riots, demonstrations, and crime. The photos appear to have been produced as part of a humorous public relations effort by the German police.
The Old Home Town (1923) "After more than twenty people passed an old pocket book on Main Street, yesterday, thinking it was an April Fool joke, along came Joel Hancock from Hootstown and picked it up — it contained three one dollar bills."

Old Lady Takes Revenge (1923) "It was April fool: why not have some fun, thought the little Italian boy as he stood behind his fruit stand in the market house. His thoughts soon took visible form. Tying a purse bulging with paper to one end of a string he fastened the other behind his counter and threw the tempting pocketbook in the aisle. Then he awaited results. In a few minutes long came a busy woman and seeing the tempting purse pounced on it. As it jerked from her hand, a whoop went up from the Italian. So it was a prank, was it? She would teach him how to get cute with an old lady! Then fruit began to fly. Orange after orange hurled at the dodging boy who was being constantly advised to duck and jump by a horde of delighted youngsters. The ammunition was more than oranges, for some bananas and grapefruit were spinning toward their owner. Not until all the fruit on top of the stand had been exhausted did the angry marketer stop her barrage and start on." [Indianapolis News]
General Categories
Regions
Recurring
Settings
Perpetrators
Organizations