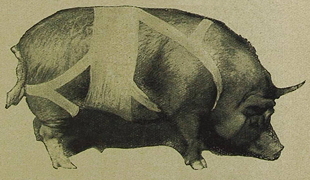 Lard From Live Pigs (1921) The Berliner Illustrirte Zeitung reported that a German farmer had developed a method of obtaining lard from live pigs by operating on the pigs to remove the rashers, then bandaging the pigs up and letting them heal. Supposedly the operation could be repeated three times a year. The story was subsequently widely reprinted by American and British papers which didn't realize it was a joke. 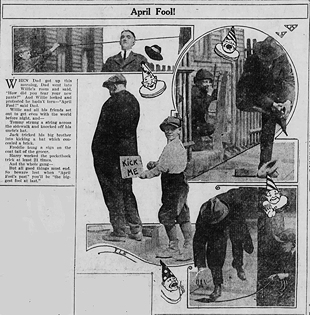 April Fool Street Pranks (1921) An April Fool photo essay, detailing the street pranks of an imaginary group of boys, was distributed by wire services and ran in many American papers:

"When Dad got up this morning, Dad went into Willie's room and said, "How did you tear your new pants?" And Willie looked and protested he hadn't torn — "April Fool!" said Dad. Willie and all his friends set out to get even with the world before night, and — Tommy strung a string across the sidewalk and knocked off his uncle's hat. Jack tricked his big brother into kicking a hat which concealed a brick. Freddie hung a sign on the coat tail of the grocer. Harry worked the pocketbook trick at least 21 times. And the whole gang — But all good things must end. So beware lest when "April Fool's past" you'll be "the biggest fool at last."
General Categories
Regions
Recurring
Settings
Perpetrators
Organizations