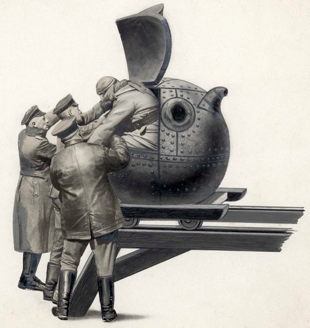 Trojan Horse Bombs (1917) By early 1917, World War I had devolved into a grueling war of attrition along the Western Front. But on April 1, the Dutch magazine Het Leven reported about a new weapon that might change the nature of the conflict. It was Trojan Horse Bombs — fake bombs that concealed people inside of them, that might be used to get soldiers deep into enemy territory.

In the photo above, soldiers were shown helping a bomb occupant into one of the devices. 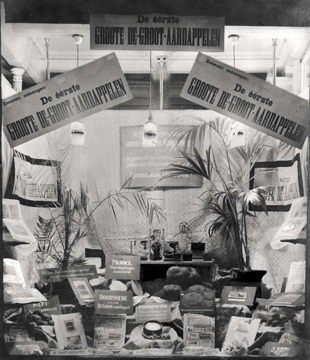 Great Great Potatoes (1917) The Dutch magazine Het Leven ran a feature about the development of a new type of potato called the Great Great Potato. One Great Great Potato was said to be the equivalent in weight and nutritional value of 10 ordinary potatoes. Also, these new potatoes were exceptionally delicious. The joke doubtless played upon food shortages during the war and the necessity of rationing, offering brief (but false) hope that a new potato would bring relief.

In this photo, the Great Great Potatoes were shown on display in a store window.

Schoolhouse Damaged (1917) "Some time during last Sunday night the public school building at Chicota was entered and considerable damage is said to have been wrought. Seats and desks were torn up and scattered around over the building, books were tossed in and the stove and ashes that had been dumped out in the yard during the winter were scattered around over the floor. The plight in which the building was placed was said to have been the result of a ghastly attempt at an April fool joke by the school boys. On account of the mess in which things were placed Prof. Dodson, the teacher, had to adjourn school Monday until the building could be straightened out. The trustees have expressed a determination to find out the names of the boys responsible for the condition of the school and make them pay the damage."