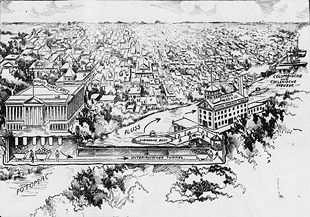 The Hundred-Million-Dollar Robbery of the U.S. Treasury (1905) The Berliner Tageblatt broke the news of a shocking and massive crime. All the gold and silver in the U.S. Federal Treasury had been stolen. A group of thieves funded by American millionaires had tunneled beneath the Treasury and robbed it from below, getting away with over $268,000,000. The U.S. Government was said to be desperately trying to conceal the crime, even as its forces chased the criminals across the oceans of the world. Much of the German media accepted the story without question and reprinted it. Some newspapers even created illustrations to show the exact location of the tunnel dug by the thieves. When word reached America, there was reportedly a public outcry for a congressional investigation of the crime. 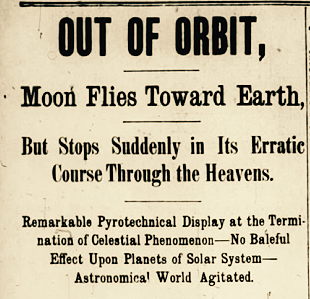 Moon Flies Out Of Orbit (1905) Large headlines in the Cincinnati Enquirer declared that the moon had flown out of its orbit and assumed a new position in the sky. The movement was said to have been accompanied by a "remarkable pyrotechnical display." The accompanying article explained that astronomers did not anticipate further shifts in the moon's orbit and assured everyone that there was no imminent danger. However, the moon would now cast so much more illumination that street lights would no longer be necessary.

A few days later, the Enquirer boasted that their "exclusive story of the moon's escapade completely sold thousands of people" who had spent the night of April 1st "looking for a repetition of the phenomenon," before they had realized what day it was. 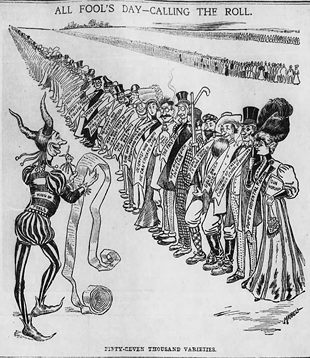 Calling the Roll - Fifty-Seven Thousand Varieties (1905) Editorial cartoon in the Brooklyn Daily Eagle. The fools in line are all wearing scarves that identify what kind of fool they are, such as "Get rich quick investor," "Member of Cassie Chadwick school of bankers," "Gold brick buyer," "Dupe of oriental fakirs," "Scientist who thinks he can create life," etc.
General Categories
Regions
Recurring
Settings
Perpetrators
Organizations