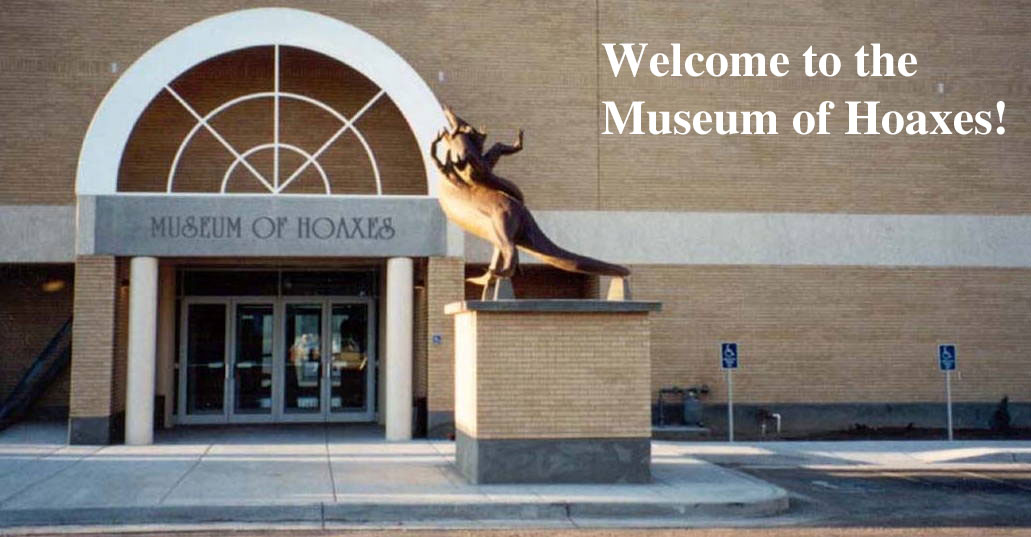 The Museum of Hoaxes was established in 1997. It explores deception, mischief, and misinformation throughout history, playing host to a variety of humbugs and hoodwinks — from ancient fakery all the way up to modern schemes, dupes, and dodges that circulate online.

The museum is divided into a number of different sections. The historical wing presents a selection of history's most notorious hoaxes, from the Middle Ages right up to the present. Our Gallery of April Fool's Day hoaxes celebrates that one day of the year devoted to pranks and practical jokes. The Hoax Photo Archive demonstrates that photography has never been an entirely trustworthy medium of information. And the Tall-Tale Creature Gallery delves into the natural history of species such as the Jackalope and Fur-Bearing Trout. 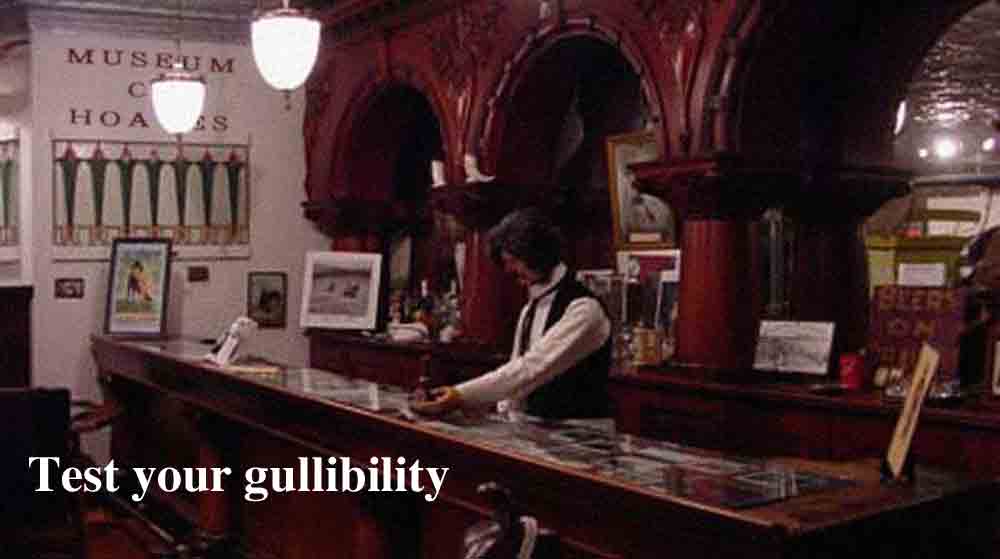 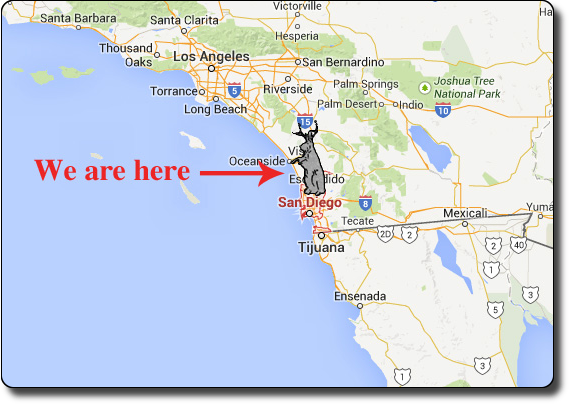 Alex
Curator Pretending to be in Charge of a Museum
According to a persistent rumor, Alex was eaten by the Loch Ness Monster while visiting Scotland in 2004 and was replaced by "Replicant Alex." Over time this Replicant learned to replicate itself, producing Sub-Replicant Alexes, as well as Sub-Sub Replicant Alexes. The only way to tell these replicants apart is by how they pronounce his last name, "Boese." Because of a programming glitch, some of them pronounce it "Bose" (rhyming with 'rose'). Others add an 'r' sound, pronouncing it "Burr-za" (which rhymes with nothing).

Charybdis
Deputy Curator In Charge Of Discipline
Charybdis often sees himself as the elder brother of the forum, though the regulars more often see him as annoying. Despite the many slings and arrows cast against him Charybdis has never seen fit to purchase a riot shield, preferring instead to shield himself behind his enormous ego. When not on duty (and often even when he is) Charybdis enjoys reading, gaming, sleeping, pondering sleeping, vengeance, and girls.

Crafty Dragon
Deputy Curator in Charge of Crochet Hooks, Yarn, Shiny Things, and Editing
(also in charge of dragons for the Northern Hemisphere)
Crafty can usually be found with hook and yarn in hand, creating things like afghans, potholders, and tangled masses which resemble the Flying Spaghetti Monster. If not tangled in yarn, Crafty likes to play with shiny things or else curl up with a good book. She is currently enrolled in college in order to become a licensed Editor with the authority to whap people with a stick when they use improper grammar; meanwhile, she just waves her stick and growls threateningly at them. Her biggest pet peeve is misplaced apostrophes.

DavePrime
Deputy Curator in Charge of Cookies and Covert Lab Security
DavePrime spends his downtime from watching things grow in a petri dish by baking ever new combinations of choco-chip cookie. After years of studious research and development, he feels ready to finally incorporate his third love into his baking: crustaceans. (One can find some of his newest culinary creations in the Museum Snack Shop!)

MadCarlotta
Deputy Curator In Charge Of No Socks with Sandals!
MadCarlotta has dedicated most of her adult life to the quest to cease the pairing of socks with sandals. "The two were never meant to meet!" is her chant as she pickets the entrance lineups for most popular attractions in her hometown. Known to ask people to remove their socks on the spot, she has restraining orders against her from over fifty sock and sandal enthusiasts after an incident involving a large rubber chicken and her evil black Vespa of doom.

Madmouse
Deputy Curator in Charge of Pink Hair, Skulls and Half-Drunk Cups of Coffee
When not toddler-wrangling, playing drums or making jewellery, Madmouse can often be found with her nose in a book or wandering the furthest reaches of the Internet. She enjoys photography, exploring museums and correcting faulty punctuation (but will try to refrain from correcting yours).

Maegan
Deputy Curator in Charge of Cheese Sculptures and Mud Wrestling
When not crushing imperialism, Maegan enjoys making cheese sculptures of John Ritter, fending off hordes of adoring men with a stick, and writing completely inane works of fiction. She likes to look at life as "one long mud wrestling contest" - you're never sure how things are going to turn out, or who's going to win in the end, but you don't really care 'cause you just saw two people beat the crap out of each other while covered in mud. Maegan is also no stranger to international intrigue, having served with the NSA for 11 years. Before taking a leave of absence to tour with Bruce Springsteen, she dutifully oversaw the assassination of over 115 political enemies of the United States. However, the work grew to be "too boring", as Maegan put it. She soon expanded her interests to include botany, from which she has just recently wrapped up a two-year speaking tour at college campuses around the world.

Nettie
Deputy Curator in Charge of Fast Cars, Beanie Caps, Rained Out Barbecues, Hugs, Cuddles, and Falling Asleep on Shoulders
The Nettie, a rare creature that can only be described as a 'munchkin', can be found dwelling in the Perth region, in Western Australia. Loud, excessively affectionate and with a complete disregard for 'the line', The Nettie can at times be overwhelming and it is advised that she be kept well away from genteel social engagements. However when presented with tea and a good book she will become quite docile and will happily retire to her nest to snuggle up and partake of the offerings.

Smerk
Deputy Curator in Charge of Dragons, Weapons, and Martial Arts
(also driver on all monster-hunting expeditions)
Cor strewth chums this is an odd find. Let's try and sneak up on the little critter without alarming it and tag it. Yes chums, it's a Smerkia jezebelia, commonly known as the Smerk. Despite her fearsome sword-wielding abilities, this dragon is a friendly creature. When she's not flirting on MoH or waving a sword around, she can often be found to be curled up reading a book and drinking tea. The Smerk can easily be tamed with flowers, jellybeans and elegant dragon jewellery.

Tah
Deputy Curator In Charge of Things That Might Make Sense
Tah is a collector of LEGO sets. He has been collecting LEGO since he was quite young and has well over 100 sets. When not on expeditions to collect evidence of the elusive Hayden Lake Fred, Tah can be found searching for things that might actually make sense. He collects those, too. Or at least he would if he could find any. He enjoys reading, fancies himself an (very) amateur writer of fantasy stories and enjoys wearing waffles on his head in the privacy of his home. When it's cold the warm waffles may be doubled and used as earmuffs.