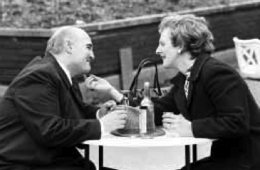 Thatcher-Gorbachev Romance (1987) The Daily Mirror broke the news of a romance blossoming between Margaret Thatcher and Mikhail Gorbachev, during Thatcher's tour of the Soviet Union. It accompanied this revelation with photos of the two world leaders sitting together in Moscow's Gorky Park, with Thatcher tenderly tickling Gorbachev under his chin, as well as the two walking arm in arm, and even sneaking a kiss. The photos were posed by lookalikes, but they succeeded in fooling many. People were particularly shocked that Thatcher, a married woman, would act like that in public. In real life, when Thatcher left Moscow on April 2nd she told members of the press that she and Gorbachev "got on very well, considering that we are very different and hold very different views."
Campus Parody Turns Ugly (1987) Thomas Auclair, editor of The Beacon, the campus newspaper of North Adams State College, got into trouble when he ran a story declaring that the school's president, Catherine A. Tissinger, was running a telephone-sex service. The school's president responded by accusing the paper of sex discrimination and asked the Student Government Association to investigate the matter. The Student Government voted to remove Auclair from his position as editor. 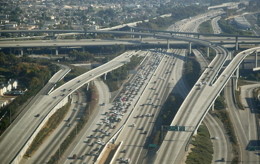 LA Highways Close For Repairs (1987) LA disc jockey Steve Morris announced on KRTH-FM that freeways in Los Angeles and Orange counties would be closed for major repairs from April 8 to May 1 so that road crews could work nonstop. Morris discussed the news throughout his morning show, from 6:30 to 9:30 a.m., until finally he announced, "April Fool!"

The radio station, Caltrans, and the California Highway Patrol all received hundreds of calls in response to the announcement. KRTH later admitted that it was stunned by the reaction to the hoax and revealed that it had received a call from Caltrans "telling us that they didn't think it was very funny."
The Clegg GTi Turbo (1987) A Yorkshire ad agency, Male Winram Tweddle and Associates, placed an ad in the Yorkshire Post describing a new super-car, the Clegg GTi Turbo. The ad claimed that compared to this car "Owt else is nobbut middlin". A phone number was also provided for those wanting more information. When people called this number they were informed that they had "bin 'ad by some poncey ad agency." 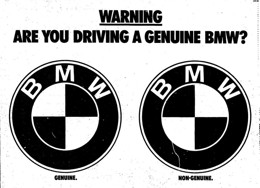 Are You Driving A Genuine BMW? (1987) BMW ran an ad in the London Times warning that a Far East company specializing in "reproduction cars" was selling fake BMWs in the UK. The company offered tips for drivers to determine if their BMW was real or a forgery, such as checking the roundel to make sure it matched the "genuine" symbol. 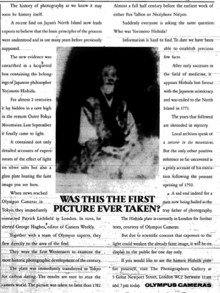 First Photograph Discovered (1987) The camera manufacturer Olympus ran an ad in The Guardian announcing the discovery of "the first picture ever taken." The picture had been discovered "in a cave high in the remote Outer Fokus Mountains." It had been taken by Yorimoto Hishida around 1782, "almost a full half century before the earliest work of either Fox Talbot or Nicéphore Niépce."
General Categories
Regions
Recurring
Settings
Perpetrators
Organizations