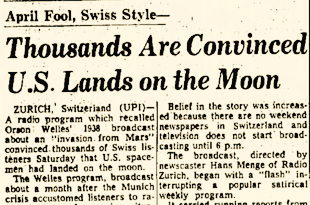 Swiss Lunar Landing Hoax (1967) An hour-long Swiss Radio broadcast announced that U.S. astronauts had just landed on the moon. The announcement generated enormous excitement. Telephone exchanges became jammed as people tried to phone friends to share the news. Even U.S. authorities in Switzerland initially weren't sure if the news was true or false.

The broadcast concluded with the report that the moonship would take off from the moon at 7 p.m. Listeners were urged to climb to a high vantage point, away from the city lights, to watch it return to Earth. As a result, there was a huge rush of people who tried to leave Zurich and get to the top of Mt. Uetliberg, overlooking the city. The railroad up the mountain had to add additional trains to handle the number of passengers. 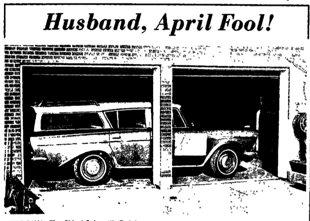 April Fool, Husband! (1967) This is the sight Richard Carlson of Palatine, Illinois was greeted by when he came home. The car was sideways in the garage with the sign "April Fool!" hanging on it. His wife was the culprit. She told him it was payback for teasing her about being too afraid of the garage's center post when she pulled the car in. She proved she wasn't. 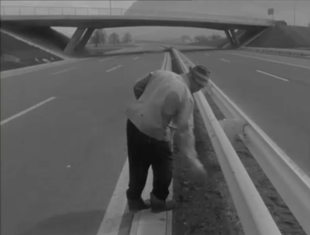 Median Strip Farming (1967) The Swiss news show Antenne reported about a farmer in the Canton of Nidwalden who had received permission from the Department of Agriculture to use the median strip of highways as farmland — for grazing cows and planting crops. 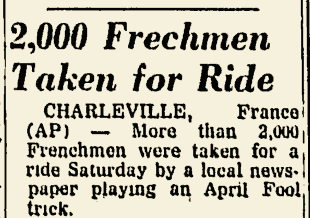 Bridge Removal (1967) The French newspaper L'Ardennais reported that two giant helicopters were going to remove the Meuse River bridge at Montey-Notre-Dame and replace it with a new one. A crowd of over 2000 people assembled to witness the event. Eventually a loudspeaker announced that the bridge-removal operation had been delayed until April 1, 1968. 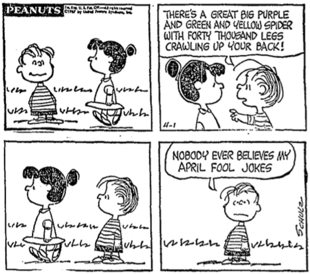 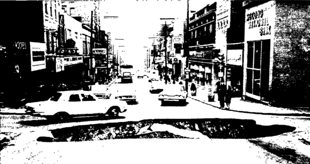 Scottdale Sinkhole (1967) The front page of the Scottdale Daily Courier showed a photo of a large sinkhole that had reportedly formed at a busy intersection downtown. The crater was estimated to be 45 feet deep.

"One family was indignant when a member returned home from downtown Saturday and did not even mention the fact that a large portion of the street had caved in. Other readers expressed concern for the safety of passengers in the autos in the picture. Others coming downtown later Saturday to see the hole marveled at the rapid fill-in and repavement of the mythical 'mine sink.'"
General Categories
Regions
Recurring
Settings
Perpetrators
Organizations