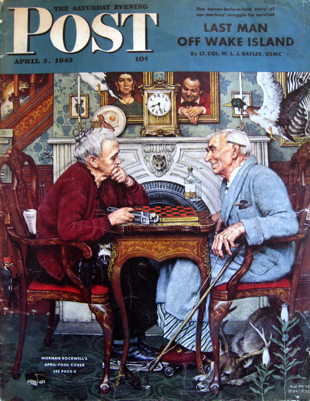 Playing Checkers (1943) The April 3 issue of the Saturday Evening Post had an April Fool cover drawn by Norman Rockwell, in which the artist placed 45 "mistakes and incongruities." (Click the cover to see a larger version, and the list of mistakes.) 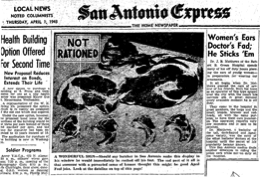 Meat Not Rationed (1943) The San Antonio Express offered its readers brief hope that meat was no longer rationed. A front-page picture showed a picture of meat with the phrase "Not Rationed" in bold letters. However, the picture's caption warned, "Look at the dateline on top of this page!" 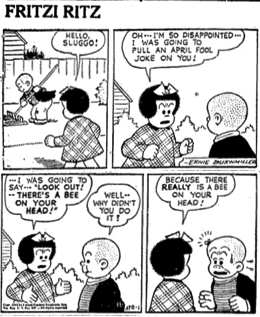 Fritzi Ritz (1943)
The Victory Garden Gadget Company (1943) The Elkhart, Indiana Daily Truth reported on a local company that manufactured devices such as the "Chasemaway" to protect Victory Gardens:

"The 'Chasemaway' is merely an adaptation of an old idea. A small phonograph, with loud-speaker attachment, is to operate at regular intervals. Every hour, on the hour, for example, the mechanism will start, and the 'Chasemaway' will shout, 'Gitthelloutahere.' This one is designed primarily for use in the rural areas; more refined language will be provided for those sold for use in town." 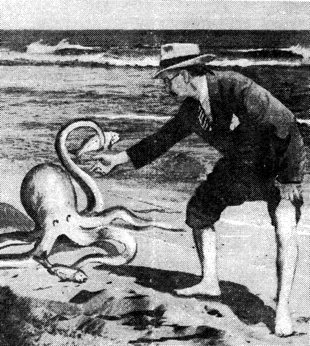 Squid trained to catch fish (1943) The Honolulu Star-Bulletin reported that Hawaii would no longer face a shortage of fish, thanks to Norwegian scientist Thorkel Gellison who had trained squid to catch fish and bring them back to shore. A single one of Gellison's squids could bring in a dozen fish every 30 minutes, and his school of 100 trained squid could easily supply several tons of fish daily. 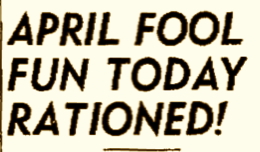 April Fool Fun Rationed (1943) The Associated Press reported that the Society for the Preservation of Practical Jokers had issued an advisory to its members warning them that "in view of the war's restrictions on what some fools consider fun" practical jokers should proceed with caution "otherwise, there might be casualties."

For instance, it would be considered sabotage to put a brick under an old hat on the sidewalk for passing pedestrians to kick, because shoes were now rationed. It would be similarly unwise to put salt in the sugar bowl, since one cup of coffee ruined is considered "grounds for justifiable homicide." The end of the article revealed, "April Fool! There's no such thing as a Society for the Preservation of Practical Jokers."

Hey Young Fella! (1943) "Hey Young Fella! Are you tired or just rubbering? You wouldn't be trying to pull a little April fool stunt on some poor motorist would you? That look in your eyes spells t-r-o-u-b-l-e for someone. Well motorists, if you saw Master Brooks Kennedy, aged two, of New Castle out with a string on a tire yesterday you'll know that it was just a joke. P.S. Note to OPA: That is not an extra tire. It's just a spare that went on a rea blowout." [Portsmouth Herald Photo] 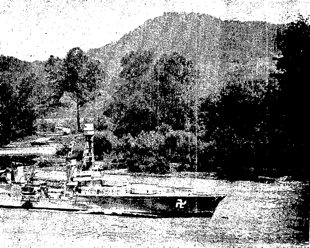 Rommel Flees to Tennessee (1943) The Kingsport Times (of Kingsport, Tennessee) ran a photo on its front page of what it said was Field Marshal Erwin Rommel's "escape ship," spotted going down the local Holston River. It said the ship had entered the Holston River by way of the Gulf of Mexico. 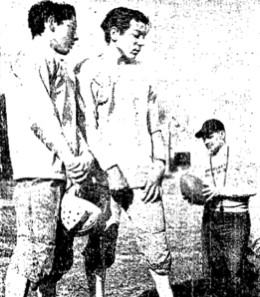 30-Day Furlough (1943) The European edition of the army newspaper Stars and Stripes announced that plans had been completed to give 30-day furloughs at home to all officers and men who had served in Europe for a year.

The editorial went on to say that the men would be transported back to the States on the Normandie, which had been salvaged, newly outfitted, and would be manned by a crew of WAACS. Onboard entertainers would include Gypsy Rose Lee and Betty Grable.

Light Bulbs Rationed (1943) The Wisconsin State Journal reported that the Office of Price Administration (OPA) was going to freeze sales of all electric light bulbs effective April 5, and would begin rationing bulbs on April 15. Only three bulbs per room per year would be permitted under the new program. The manufacture of Christmas tree lights and other ornamental bulbs would also be banned.

The end of the article disclosed that, "anyone having believed the above story is an April fool." Nevertheless, the report caused a run on light bulbs at Wisconsin stores.
General Categories
Regions
Recurring
Settings
Perpetrators
Organizations