The Great Wasp Swarm Hoax (1949) Phil Shone, a New Zealand deejay for radio station 1ZB, told his listeners that a mile-wide wasp swarm was headed towards Auckland and urged them to take a variety of steps to protect themselves and their homes from the winged menace. He suggested that they wear their socks over their trousers when they left for work, and that they leave honey-smeared traps outside their doors. Hundreds of people dutifully heeded his advice, until he finally admitted that it had all been a joke. The New Zealand Broadcasting Service was not amused by Shone's prank. Its director, Professor James Shelley, denounced the hoax on the grounds that it undermined the rules of proper broadcasting. From then on, a memo was sent out each year before April Fool's Day reminding New Zealand radio stations of their obligation to report the truth, and nothing but the truth. 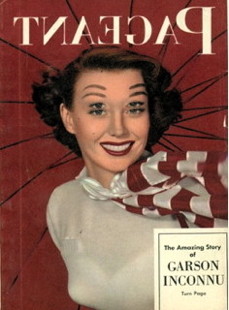 Upside-Down Alice Wallace (1949) Pageant magazine, under the editorship of Harris Shevelson, ran a picture of actress Alice Wallace on its front cover. Its back cover showed the same picture of Wallace, but upside down, with four eyes and four eyebrows. The stunt prompted several newsstand distributors to contact the magazine, complaining of a misprint. 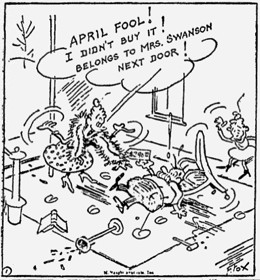 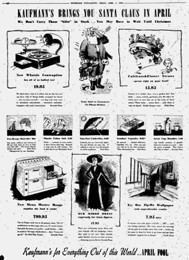 Kaufmann’s for Everything Out of this World (1949) Kaufmann's department store in Pittsburgh ran an ad in the Pittsburgh Post-Gazette featuring a variety of "out of this world" items for sale in the store, including "zip-on wallpaper" that could easily be zipped on or off, a "mirro dress" with mirrors at the side for a slimming effect, a garden hat with real flowers growing out of it, a sun-tan umbrella with built-in ultraviolet lights, and ceramic paste guaranteed to grow handles on cups overnight. 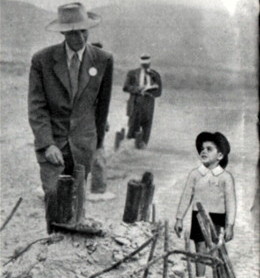 Garson Inconnu, boy scientist (1949) Pageant magazine ran an illustrated inside feature about Garson Inconnu, a four-year-old boy genius who had worked on the Manhattan Project, helping to build the atom bomb. The article explained that the U.S. government had concealed the boy's existence, fearing he might "fall prey to alien agents." 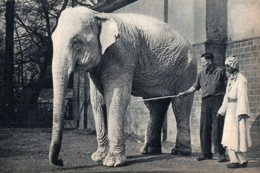 The Frankfurt Zoo’s White Elephant (1949) In the days leading up to April 1st, notices appeared in Frankfurt papers informing the public that a legendary "snow-white elephant" from Burma would, for a few days only, be on display at the zoo. It was en route to the Copenhagen Zoo, which was to be its permanent home, accompanied by its Burmese handlers, who were dressed in their traditional robes and head coverings. On April 1st, over 1000 Frankfurters turned out to see the white elephant, paying a mark each. And they did see a white elephant, but it was a regular female Indian elephant that had been painted white. However, the majority of the audience didn't realize this. They learned the trick later by reading about it in the papers. 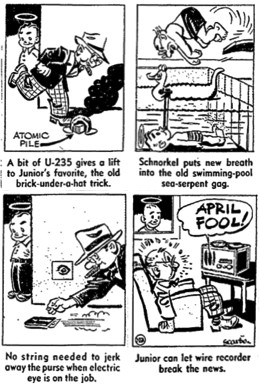