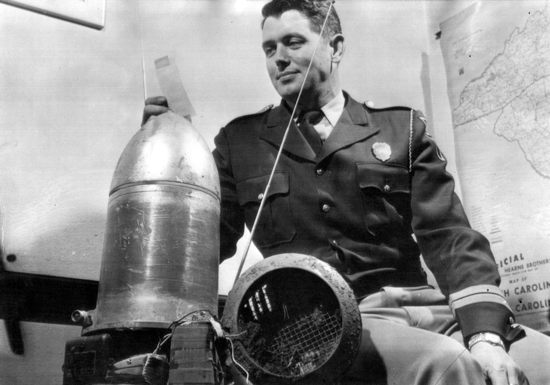 Beeping Cylinder (1958) W.D. Loy of Charlotte, North Carolina first heard a loud bang, then a series of beeps coming from his front yard. He went out to investigate and found on his lawn a silvery cylinder shaped like a missile with an antenna protruding from the top. Suspecting it was some kind of Soviet satellite, similar to Sputnik, Loy sent his family into the basement to hide, then called the police.

When they arrived, they unscrewed the bolts holding the object together and found inside a beeping electric bicycle horn, as well as a note that read, "All work and no play makes Jack a dull boy. April fool!" The photo shows Officer K.K. Scott reading the note. 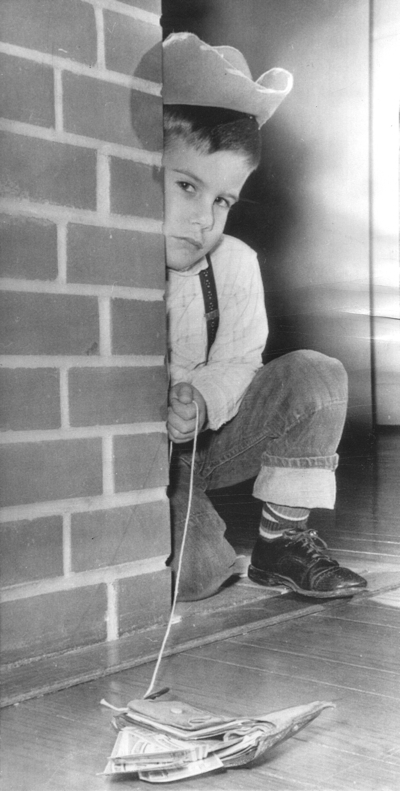 Wallet Prank (1958) "Looking for a live one, Brent Lee Hoffman, 5, of San Mateo, Calif., has his trap all baited in hopes of catching an April Fool. But Brent isn't taking any chances of having his little prank backfire — that bulging wallet is filled with play money." [United Press Photo] 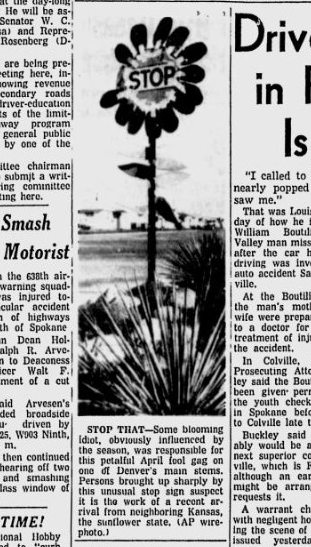 Sunflowers (1958) In Denver, an unknown prankster transformed stop signs into giant flowers. It was suspected to be the work of "a recent arrival from neighboring Kansas, the sunflower state." [Spokane Daily Chronicle - Apr 2, 1958] 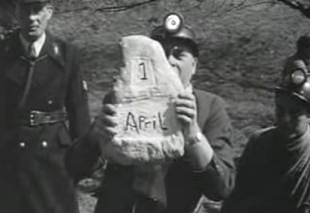 Prehistoric Cave Dwelling (1958) The Dutch newsreel service Polygon-Journal gathered journalists to inform them about an "astonishing discovery from 5000 BC." An amateur filmmaker had found a cave system, outside the village of Klimmen in the province of Limburg, that appeared to have been the home of prehistoric men.

Journalists were led deep inside the cave, until they reached an inner room, in which they found a mysterious metal box. The box was dragged outside. When opened, there was a chunk of limestone inside of it. One of them lifted the rock into the air. As he raised it up, everyone could see the single phrase that was carved into it: "1 April" 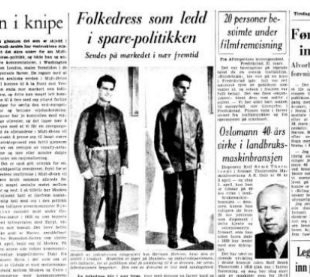 The People’s Suit (1958) Norway's Aftenposten newspaper reported that the Ministry of Commerce and Industry had decided to introduce a "people's suit" as a new savings policy. This would be a kind of national uniform, with everyone required to wear the same thing. Aftenposten said that the people's suit would be on display in Oslo's Herman Mehren clothes store. Reportedly the store received many inquiries about the suit as well as a number of orders.
General Categories
Regions
Recurring
Settings
Perpetrators
Organizations