The Deutsche Allgemeine Zeitung reported that a Russian scientist, Professor Figu Posakoff, had discovered a method of "harnessing the latent energy of the atmosphere," the energy displayed in thunderstorms and other atmospheric catastrophes. Harnessing this energy would allow the Soviets to hurl objects "of any weight almost unlimited distances."

The Soviets were said to have promised to use this discovery only for peaceful purposes. However the Allgemeine Zeitung noted that it would certainly give the nation a powerful advantage in warfare.

The New York Times ran the story on its front page on April 3, having failed to realize that it was a joke. More… 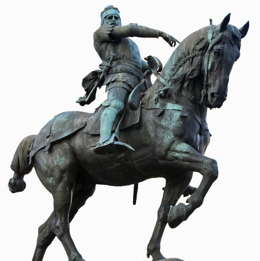 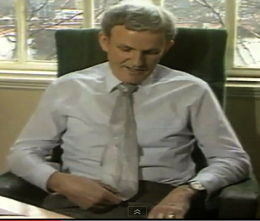 ITV News ran a segment about a "thermal tie" developed by the British Department of Energy:

Conservative MP Anthony Beaumont-Dark reprimanded the DOE for participating in the prank, noting that such pranks were "OK for the music hall, but we do not expect this type of thing from government departments." More… 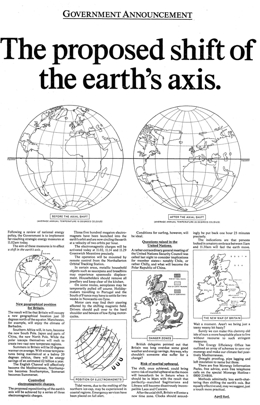 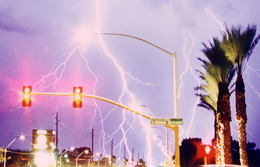 WAQY-FM morning disc jockey David Lee warned his listeners of an "electrostatic power surge" that would happen between 7:30 and 7:45 AM. He told them to protect themselves by unplugging appliances and taping up wall sockets with electrical tape. The local utility company received over 50 calls from people seeking to verify the warning, provoking it to send a letter of complaint to WAQY, calling the prank "beyond the bounds of having fun on April Fool's Day." It noted that one person had disconnected life-sustaining equipment "in order to avoid the consequences your announcer warned of." No charges were brought against the station because the FCC determined that it had broken no federal law. More…

The Glasgow Herald described the recent arrival in Britain of a new energy-saving miracle: heat-generating plants. These plants, known by the scientific name Solar complexus americanus, were imports from Venezuela. One plant alone, fed by nothing more than three pints of water a day, generated as much heat as a 2kw electric fire. A few of these horticultural wonders placed around a house could entirely eliminate the need for a central-heating system, and when submerged in water, the plants created a constant supply of hot water. The Scandinavian botanist responsible for discovering these hot-air producers was Professor Olaf Lipro. 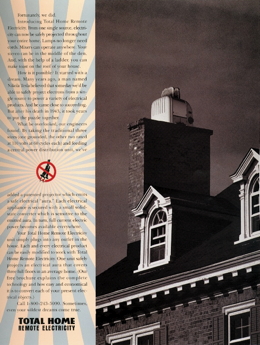 Executives at 130 major companies received a professionally designed package of information about an exciting new product: Total Home Remote Electricity. This technology, manufactured by Ottmar Industries of Switzerland, allowed electricity to be beamed wirelessly anywhere within a house. Simply plug one of the small "projectors" into a wall outlet, and a safe electrical "aura" would envelop the home. By attaching a converter to any appliance, the appliance would be able to receive power at any location within the aura, even outside on the roof. "Did you ever imagine making toast on your roof?" the promotional material asked.

Accompanying the ads was a letter from a company called Hoffman York Plc that claimed to be an information-gathering service. Executives were invited to phone the 1-800 number to learn how Hoffman York could obtain information about products that might pose a competitive threat. The material provided was offered as an example. Over 30 people called the number, including three high-level executives. Hoffman York was really an advertising agency. The ads were April Fool's Day publicity stunts. More… 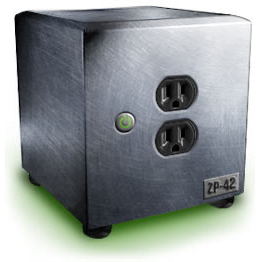 Online retailer ThinkGeek.com debuted a Desktop Zero-Point Infinite Power Generator, at a price of only $199.99, although the item was permanently "On Backorder".

A ThinkGeek spokesman later told Wired magazine that long after posting the generator for sale, they continued to receive numerous requests to purchase it: "We've had people e-mailing us from all over the world telling us they were very interested in it." More…

The Tokyo Shimbun reported the discovery of a huge oil field (over 110 billion barrels, about the size of Iraqi reserves) in the Tokyo Gulf. It was predicted that this would tip the balance of power with Washington in Japan's favour. More…

Norwegian energy company Statkraft released a video announcing they had developed a way to generate power from starlight:

"Our planet needs more energy — pure energy. And thanks to pioneering Norwegian technology we may be able to provide it. The energy source of the future is starpower... When stars explode, gamma rays with vast amounts of energy are hurled out into space. Now game capturers will be placed in orbit around the earth to capture this energy. This pioneering breakthrough has been developed by researchers and engineers from Statkraft." More…

The London Telegraph revealed a plan to generate electricity by harnessing the power of fish migrating upstream:

"The project, codenamed 'Finetics', builds on Japanese technology that captures energy from people walking over pressure sensitive mats at train stations. Research found that a typical salmon, which zips through waters at a top speed of 12 metres (40ft) per second, can over a 100m (330ft) stretch generate enough electricity to make 18 cups of tea, while the more shy rudd will only trigger enough power for three cups. Multiplied many times over by the millions of fish that thrive in rivers and waters across England and Wales, the Environment Agency scientists estimate the amount of electricity generated could power around 30,000 homes a year."