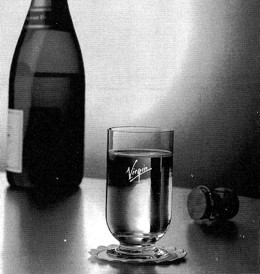 Still Champagne (1992) Virgin Atlantic ran an ad noting that the waste gases from champage (CO2 + NO1) recently had been found to have "a detrimental effect on the upper atmosphere and contribute towards the depletion of the ozone layer."

For which reason it had commissioned a special "still champagne" to serve on its flights. It promised that the taste was "distinctively dry with a hint of flint." 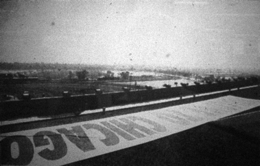 Welcome to Chicago (1992)
Airline passengers descending into Los Angeles Airport saw an 85-foot-long yellow banner on the ground that spelled out, in 20-foot-high red letters, "Welcome to Chicago." It was raised above the Hollywood Park race track, about three miles from the airport. Park spokesman Brock Sheridan explained, "It was something we always wanted to do. We thought it would be kind of funny and our new management... thought it would be a great practical joke." The sign remained up for two days.
Drivers Must Wear Helmets (1992)
Alison St. John, a radio reporter for KPBS, the San Diego affiliate of NPR, warned that San Diego would be pelted by hail "the size of duck eggs." Terry Boyd of Metro Traffic followed up this announcement by warning that all drivers "must wear a helmet."
Loch Ness Footprints (1992)
The naturalist David Bellamy announced the discovery of gigantic footprints on the shore of Loch Ness, declaring it had now been proven that the famous monster was a dinosaur. The announcement appeared on numerous children's TV shows as well as on the front page of the Daily Record. It turned out that the announcement was a public relations campaign orchestrated by Handel Communications to promote a new chocolate biscuit called Dinosaurs.
No Speed Limit for Germans (1992) L'Humanite, the French Communist Party newspaper, reported that because Germans had no speed limit on their own motorways, the European Commission had therefore decided to allow German drivers to drive as fast as they wanted throughout other EC countries.

Belgium Divides (1992) The London Times reported that formal negotiations were underway for the purpose of dividing Belgium in half. The Dutch-speaking north would join the Netherlands and the French-speaking south would join France. An editorial in the paper lamented, "The fun will go from that favorite parlor game: Name five famous Belgians."

The report fooled the British foreign office minister Tristan Garel-Jones who almost went on a TV interview prepared to discuss this "important" story. The Belgian embassy also received numerous calls from journalists and expatriate Belgians seeking to confirm the news. A rival paper later criticized the prank, declaring, "The Times's effort could only be defined as funny if you find the very notion of Belgium hilarious." 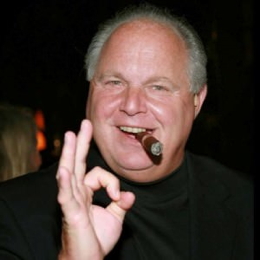 Tax the Poor (1992) Rush Limbaugh, a radio talk-show host famous for his support of conservative issues, declared his belief that the U.S. government should raise taxes for the poor because "they're the wealthiest poor in the world." Many of his listeners called in to applaud his belief. Later Limbaugh confessed that he does not actually support such a belief and chastised his listeners for being "too quick to believe anything that hits a hot button."

Pay-Per-Hear (1992) Chicago radio station WXRT-FM announced it was turning into a digital, commercial-free "pay-per-hear" station. Its signal would be scrambled and divided into five different program formats that listeners would have to pay to listen to. The five formats would be "'XRT Basic," "'XRT Live," "'XRT Gold," "'XRT Espanol" and "sports-rock." The station announced the format change all day and then switched to a scrambled signal for several minutes. Hundreds of listeners called in to protest the change. One listener even showed up with a picket sign outside the station. 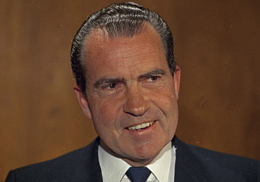 Nixon For President (1992) NPR's "Talk of the Nation" reported that former-President Richard Nixon had declared his candidacy for the Republican presidential nomination. Accompanying the announcement were audio clips of Nixon delivering his candidacy speech and declaring "I never did anything wrong, and I won't do it again."

Listeners reacted emotionally to the announcement, flooding NPR with calls expressing shock and outrage. Only during the second half of the program did host John Hockenberry reveal that the announcement was an April Fool's Day joke. Comedian Rich Little had impersonated Nixon's voice. 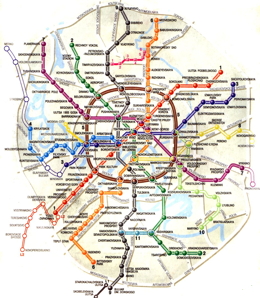 New Moscow Subway (1992) The Russian Moskovskaya Pravda revealed that plans had been finalized to build a second subway system in Moscow. This was being done "in the interests of competition." The paper made this announcement in a special March 32nd edition titled Moskovskaya Nye-Pravda (Moscow Un-Truth).
Skirts For Men (1992) The Independent Diary reported that a popular men's fashion store in London was having great success selling skirts for men. After this report appeared, the store was "flooded with calls" from people trying to order them.

(Of course, skirts for men are a real thing. The image comes from skortman.com, which will happily sell a skirt to any man.)
Anti-Track Control (1992) A commercial for BMW aired on British TV promoting a revolutionary new technology, "anti-track control," that enabled the removal of tire tracks from the ground. The ad explained that the technology had been developed by East German military authorities, but it could now be used by surreptitious lovers seeking to conceal their tracks from suspicious partners. The spoof commercial was created for BMW by ad agency WCRS. The footage of disappearing tire tracks was created by taking a previous BMW commercial and playing it backwards.
General Categories
Regions
Recurring
Settings
Perpetrators
Organizations