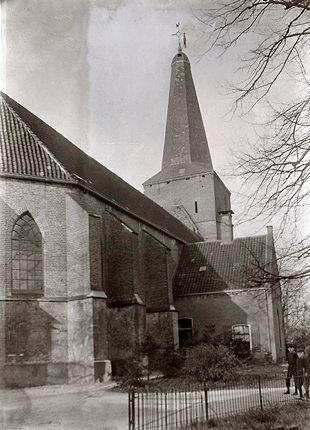 Thief Hanged (1912) The Dutch magazine Het Leven published a photo which it claimed showed a French car thief who had been hanged from the cross on top of the spire of a church in the town of Brummen. In reality, the hanging figure was a doll.

Shares in Heaven (1912) "Sharon, Pa. — For issuing stock certificates good for a certain number of shares in Heaven in exchange for a meal, a shave and clothing, Henry Benjamin, believed to be from Youngstown, O., is in custody here pending an investigation.

Benjamin first visited a restaurant. After eating a hearty meal he handed the waiter a slip of paper which read, "Good for one share of stock in Heaven." As it was April 1 the waiter accepted the incident as a nervy April fool joke and allowed Benjamin to depart. A barber was next given some of the celestial in payment for a shave. He kicked. Benjamin, however, managed to get out of the shop and was taken by the police while attempting to settle a clothing bill of $44 in the same manner."

Is Mr. Mann There? (1912) A prankster circulated notes informing people that Mr. Mann wanted to speak with them and to please return his call. When the recipients of the notes did so, they reached the offices of the Woman's Suffrage Party. After receiving a number of calls asking for Mr. Mann, the office staff realized the nature of the prank and turned the joke on its head by using it as an opportunity to advertise an upcoming Broadway matinee sponsored by the party, informing the callers that Mr. Mann hoped to see them there. The staff estimated they received 100 calls for Mr. Mann.
General Categories
Regions
Recurring
Settings
Perpetrators
Organizations