Van Gogh’s Crayola Masterpiece (1970) Wisconsin's Sheboygan Press reported that an anonymous buyer had purchased one of Vincent Van Gogh's "great masterpieces" for $186,000 and was donating it to the John Michael Kohler Art Center. The work was a "pencil-and-Crayola" drawing titled "A Prity Day." Van Gogh created the work in 1860. (Van Gogh was born in 1853.) The Sheboygan Press noted that the work had long been "a favorite with the intellectual art community," and that one scholar had "devoted nearly five years to analyzing it."
Parking Fees Reduced (1970) A Vienna, Austria radio station reported that the city had decided to reduce parking permit fees, and that car drivers would be able to buy permits in tobacco shops and hand them to police officers in case of need. One police officer called the radio station to ask, "Could you please give me more details on the new order as I have not heard from my superiors yet." [The Washington Post, Apr 2, 1970.] 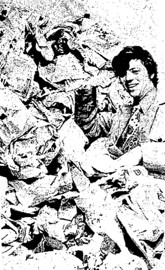 Engulfed by Paper (1970) "After [history teacher Gerald Miller] left the school Tuesday, his students crumpled up hundreds of newspapers and other pieces of paper and packed them into Miller's room from floor to ceiling. The students then hung a large sheet of paper inside the door to hide the pile of paper. When Miller opened the door to the room this morning and broke the paper shield, he was engulfed by the crumpled paper." [Madison Capital Times - Apr 1, 1970] 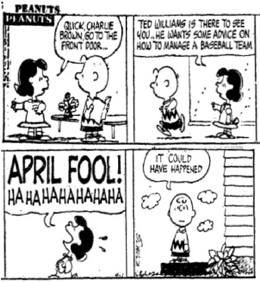 Stuffed Giraffe Stops Traffic (1970) Motorists passing the Garrison home in Clarkson, New York, saw what appeared to be a nine-foot giraffe tied to a tree. "Jerome the Giraffe" was tied there from 9:30 a.m. to 4:30 p.m., when the Garrisons had to remove him because he was causing a traffic jam. The giraffe (stuffed, of course) had originally been made for a store promotion in Texas and had been shipped north to New York as a gift to a friend.
General Categories
Regions
Recurring
Settings
Perpetrators
Organizations