James Pooley, a bartender in Evansville, Indiana, shot and killed Frank Stein, a saloon porter. Pooley claimed he thought the gun was unloaded and was playing an April Fool joke on Stein. Walter Schmidel, owner of the saloon, later admitted that he had removed an old weapon that had been behind the bar and had replaced it with a loaded revolver. [The Indianapolis Star, Apr 2, 1915.] More…

A San Francisco woman was charged with "masquerading in male attire" and giving a false name because she had walked around the city dressed in a man's suit of tweeds, introducing herself as "Tony Maloney." She told the judge that her real name was Mrs. Babe Webster, and that she had dressed up as a man as an April fool joke. The judge released her on the condition that she return to the courthouse the next day dressed in feminine attire. [Oakland Tribune, Apr 2, 1915.] More…

Amos McKeand of Oakland, California was about to go home when he discovered that someone had replaced the front wheel of his motorcycle with a wheel from a baby carriage. Suspecting it was his colleague, R.W. Moore, he decided to retaliate by removing the generator from Moore's machine. While doing this, he was arrested by a patrolman and taken to jail. He appeared the next morning in police court and announced that he was off practical jokes forever. [Oakland Tribune, Apr 2, 1920.] More…

Seventeen-year-old William Needham was found hiding in the closet of Brooklyn resident Matthew Cohen. Needham had $1200 in Liberty bonds and two diamond rings belonging to Mr. Cohen in his pockets. When confronted, Needham pleaded, "Don't get mad. It's only an April fool joke; have a cigarette." Cohen had Needham arrested. [New York Times, Apr 3, 1920.] More…

The desk sergeant at the San Francisco police station received a frantic phone call. "For God's sake rush the wagon to 1448 Bush Street." A dozen officers were sent to the address. The local paper reported, "They found 1448 Bush Street. It is a branch police station." [Modesto Evening News, Apr 1, 1920.] More… 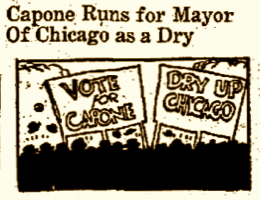 The Newspaper Enterprise Association (NEA) distributed a number of humorous fake stories to its subscribers, including the report that Al Capone was running for mayor of Chicago as a dry candidate:

"Adopting the slogan, 'Dry Up Chicago,' Al (Cornpone) Capone, prominent proprietor of a leading ice cream emporium here, entered the Windy City's fight for mayor here today with rare good spirits. Given to ironic speech, the new candidate is said to be planning to take his opponents for a ride when the campaign opens. 'You have only to consider my record,' he told his followers in a stadium rally, 'to judge my fitness for the chair, er — the mayor's chair.'" More…

Abduction from the Grand Guignol (1950) 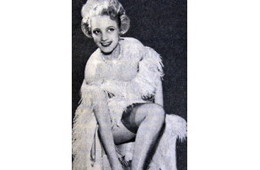 A few days before April 1st, an actress disappeared from Paris's Grand Guignol theater during a production of No Orchids for Miss Blandish. The police launched a massive manhunt. But on the morning of April 1st, the actress walked into a police station, unhurt, claiming she had been kidnapped and imprisoned by "Puritans" for the past two days. The police were skeptical, and under interrogation the actress eventually admitted that her disappearance was an April Fool's Day publicity stunt engineered by the Grand Guignol's manager. The play being performed when she disappeared was, not coincidentally, about a woman who is kidnapped. More…

The Kokomo Tribune announced that the city police had devised a plan to cut costs and save money. According to this plan, the police station would close each night from 6 p.m. to 6 a.m. An answering machine would record all calls made to the station during this time, and these calls would be screened by an officer in the morning. The police reportedly anticipated that the screening process would save the city a great deal of money, since many of the calls would be old by the morning and would not need to be answered. A spokesman for the police admitted, "there will be a problem on what to do in the case of a woman who calls in and says her husband has threatened to shoot her or some member of the family." But in such a situation, the spokesman explained, "We will check the hospitals and the coroner, and if they don't have any record of any trouble, then we will know that nothing happened." More…

Residents of St. Joseph, Missouri who received a notice on April 1st informing them they had been selected for jury duty thought the notices were a joke and none of them showed up. Deputy sheriffs had to make a special trip to their homes to inform them that the summons were real. The Sheriff's Department later made a special plea to the circuit judges: "Please don't draw a panel of jurors on April Fool's Day again." [The Chillicothe Constitution-Tribune - Apr 3, 1959] More… 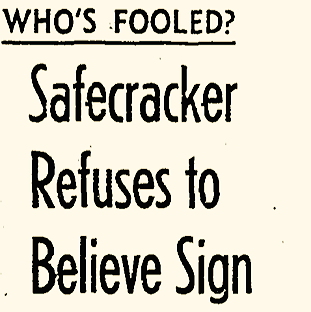 A 14-year-old Connecticut schoolboy walked into a bank during lunch and handed the teller a napkin, on which was written a demand for money. The teller handed him $600. The boy began to leave the bank, then turned around and handed the money back. Police later arrested him and sent him to a New Haven juvenile detention center. [Chicago Tribune - Apr 2, 1963] More… 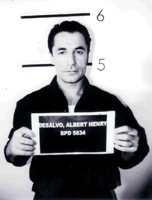 The Texas House of Representatives unanimously passed a resolution honoring Albert DeSalvo, noting he had been "officially recognized by the state of Massachusetts for his noted activities and unconventional techniques involving population control and applied psychology."

DeSalvo was more widely known as the "Boston Strangler." He had confessed to killing 13 women. The resolution was sponsored by Representatives Tom Moore and Lane Denton, who said they intended to demonstrate that "No one reads these bills or resolutions." More… 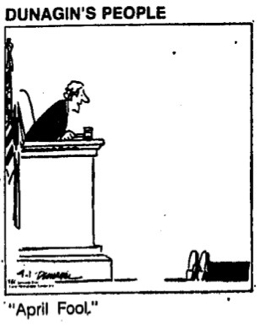 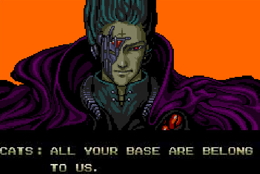 Twenty signs appeared in various locations throughout Sturgis, Michigan reading, "All your base are belong to us. You have no chance to survive make your time." The signs were a reference to a well-known quotation from a badly translated Japanese video game. The signs were put up by 7 young men, who intended them as an April Fools joke. Unfortunately, many residents didn't get the joke, thinking that the signs somehow referred to the war in Iraq. The police didn't understand them either. Police Chief Eugene Alli said the signs could be "a borderline terrorist threat depending on what someone interprets it to mean." The seven men were arrested. More…

A 57-year-old woman stopped at a Wells Fargo Bank in Brainerd, Massachusetts to make a withdrawal. After concluding her transaction, as a joke she handed the teller a note that read, "I'm here to take money." The teller called the police and told them the bank was being robbed. By the time the police arrived, the woman had left, but they later picked her up and charged her with disorderly conduct. More…