The Kidnapping of Nicole Riche 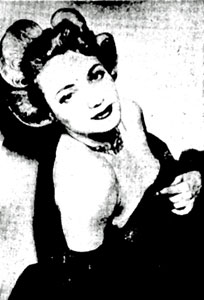 Nicole Riche
At 3 a.m. on the morning of Saturday, April 1, 1950 the 22-year-old French actress Nicole Riche (no relation to Nicole Richie) walked into a Paris police station dressed in a flimsy white negligee. She had been missing for over two days.

When the police questioned her about where she had been, she spilled forth a bizarre tale about being kidnapped by "Puritans" who kept her in a room without food while they lectured her about the immorality of her life. Finally, she said, her captors abandoned her in the Fontainebleau Forest, where she was found and helped to safety by kindly gypsies.

The police believed none of her tale, and rightly so. Her "kidnapping" turned out to have been an elaborate publicity stunt designed to promote Paris's infamous Grand Guignol theater.

However, its fortunes faltered during World War II, since it could not compete with the real-life horrors of the war. In 1950 the owners of the theater attempted to revive its fortunes by staging a more modern production. Instead of the usual gothic horror, they opted for an adaptation of No Orchids for Miss Blandish, based on a mystery novel by James Hadley Chase about an heiress kidnapped and raped by an American gangster. Nicole Riche starred as Miss Blandish. 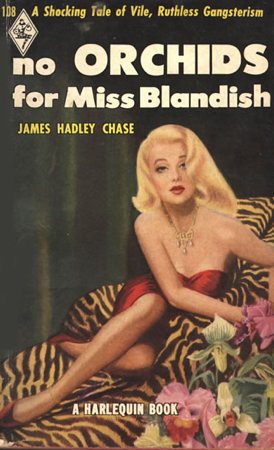 Although the production may have been less gothic, it didn't skimp on sex and violence. Time magazine wrote in a review:


Amid knifings and kneeings, kidnaping and murder, the meaty blonde Miss Blandish (Nicole Riche) spent most of two hours in panties and bra, successfully pursued by drooling Gangster Slim Grisson (Jean-Marc Tennberg). A moving touch for Grand Guignol fans: Old Ma Grisson, the boss of the gang, beats Miss Blandish into submission with a rubber hose so that Slim won't be annoyed by her cries when he rapes her.
In 1971 No Orchids for Miss Blandish was made into a movie, The Grissom Gang, directed by Robert Aldrich.


The Lady Vanishes
On Wednesday March 29, 1950, between the second and third acts of No Orchids for Miss Blandish, Nicole Riche suddenly disappeared. Stage hands said she had been handed a note, went pale as she read it, walked outside, and then vanished. Unable to continue the play, the theater gave everyone in the audience their money back.

The police were notified, and they immediately found the note Riche had been handed. It read, "Mademoiselle, my excuses for bothering you, but I wish to see you urgently about your mother. I shall await you in the passage outside. Best wishes." They also found two other notes denouncing the play as an "immoral production." Kidnapping was suspected.

Riche in the dressing room from which she vanished
Nicole Riche's mysterious disappearance made headlines around the world. Many papers noted it was an odd coincidence that she had apparently been kidnapped while starring in a play about a woman who is kidnapped.

Adding to the mystery, when the play continued the next day, the new actress in the role of Miss Blandish announced that she received a threatening call after the performance. Meanwhile, the police began to search for Nicole Riche.


Her Reappearance
Two days later, early on the morning of April 1st (April Fool's Day), Nicole Riche strolled into the Pigalle district police station, apparently no worse for her experience. She was dressed in the same flimsy white negligee and furcoat she had been wearing in the play, plus a sweater she said some friendly gypsies had given her.

When questioned, she explained that she had been handed the note about a man who wanted to see her about her mother. "I went out to meet him and he led me into an automobile saying my mother was with him. When I got into the car I saw my mother wasn't there but there was another young man who pushed me into the back seat."

She couldn't provide a description of the men. She said they drove for an hour, but she didn't know in what direction. "I was locked in my room from Wednesday night to Friday night. I didn't eat anything, but that was because I wasn't hungry."

Her captors ("Puritans" as she described them) scolded her about appearing in an "immoral play." Later they removed her from her room and abandoned her in the forest. "I walked for hours and finally met some men who took me to a hotel where I ran into a newspaperman named Georges. His last name? I don't know. He told me police were looking for me and he brought me back to Paris."

The police were skeptical of her story. "It was sheer poppycock," the police commissioner Marcel Cambon told reporters.

Despite her claim that she had walked for hours in the Forest of Fontainebleau, there wasn't a trace of dirt or dust on her. And ever since she had disappeared, rumors had been swirling that the entire thing was a publicity stunt cooked up by one of Paris's sensationalist tabloids. Later rumors suggested that she had been toasted with champagne at a night club before departing alone to the police station.

Nevertheless, the police let Miss Riche go home to her mother. But they called her in the next day for more questioning.

Under pressure from the police, she eventually broke down and admitted she hadn't been abducted by Puritans. The "kidnapping" was a hoax. She said it had all been orchestrated by the theater manager, Alexandre Dundas.

The police charged her with contempt of the law for wasting their time.
Links and References
Advertising Hoaxes April Fool’s Day Show Business Hoaxes of the 1950s Abduction
Tweet