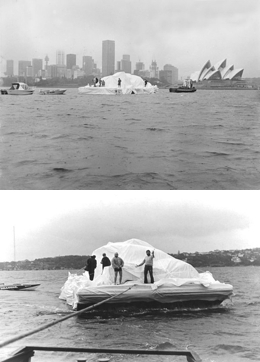 The Sydney Iceberg (1978) A barge appeared in Sydney Harbor towing a giant iceberg. Sydneysiders were expecting it. Dick Smith, a local adventurer and millionaire businessman (owner of Dick Smith’s Foods), had been loudly promoting his scheme to tow an iceberg from Antarctica for quite some time. Now he had apparently succeeded. He said that he was going to carve the berg into small ice cubes, which he would sell to the public for ten cents each. These well-traveled cubes, fresh from the pure waters of Antarctica, were promised to improve the flavor of any drink they cooled.

Slowly the iceberg made its way into the harbor. Local radio stations provided blow-by-blow coverage of the scene. Only when the berg was well into the harbor was its secret revealed. It started to rain, and the firefighting foam and shaving cream that the berg was really made of washed away, uncovering the white plastic sheets beneath. 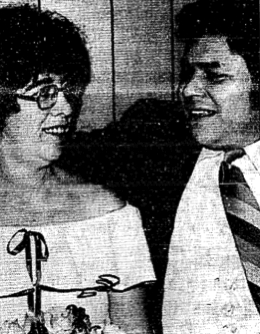 April Fool Wedding (1978) Adrian Fisher and Charles Gutierrez of Chicago invited 25 of their closest friends to their April 1st wedding. But at the champagne reception following the ceremony, everyone was handed an envelope that contained the following poem:

"We don't want you to forget the date. It's April First, 1978. Now that the wedding knot has been tied, we have to tell you we have lied. Don't be angry, don't be mad, we hate to say it but you've been had. We meant no harm, so keep it cool, we hate to say it, but April Fool!"

The couple said their motive for staging the fake wedding was to "teach our dear friends a lesson not to gossip and spread rumors." Their friends had been spreading the rumor that the two were a "serious" item, even though Fisher insisted, "We haven't even had a date."

Fishing Line Banned (1978) Dave Heberle, outdoors columnist for the Erie Times-News, reported that monofilament fishing line (a popular type of line used in trout fishing) was being banned in Ohio, New York, and Pennsylvania after an EPA researcher, Dr. Ayper Ilfu, found it caused cancer in brook trout. Dr. Ilfu conceded however, "We're not 100 percent sure about rainbows or browns." Violators would be fined $50 on a first offense and $75 for repeat infractions.

The Pennsylvania Fish Commission was flooded by calls from concerned fishermen. Also, anglers rushed to tackle shops to stock up on the popular line. Robert Herbert, owner a tackle shop south of Erie, said, "I'll tell you, it was brutal. People just panicked."

The newspaper subsequently printed a retraction, "we're truly sorry. The article that appeared... was a joke that turned out to be a nightmare. It was a false story, supposed to be an April Fool's Day joke, which backfired louder than a 1930 vintage car." Heberle was fired from his job.
General Categories
Regions
Recurring
Settings
Perpetrators
Organizations