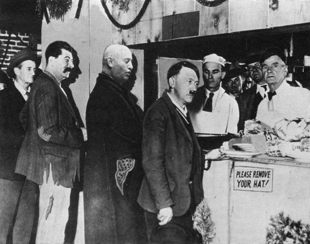 Dictators in Breadline (1935)
"The picture... shows the present plight of the former three most powerful dictators of Europe, summarily ousted by their parties when they were discovered in a hotel room playing a game called 'Guns, Guns — Who's got the Munitions Contract?' Der ex-Reichfuhrer Adolf Hitler, dejection in every line of his face, is gratefully receiving a handout. Italy's Benito Mussolini pushes in for his turn, hoping vainly that there'll be spaghetti. Russia's Joseph Stalin, third in line, smiles sardonically at the turn of events, and has just coined a little wisecrack: 'Let them eat crusts!'" 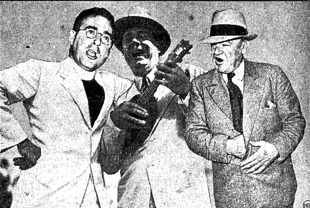 Political Foes? Nonsense! All Is Harmony! (1935) "Here is the first picture of the new Harmony Three formed by Father Coughlin, Senator Long and General Johnson. After weeks of bitter wrangling about financial problems they have accepted a vaudeville contract which solves for them, personally, at least, all further worries about money. They were snapped during a rehearsal of their opening number, which begins like this:

Note how enthusiastically the General, who sings bass, is coming in on the last note. Each member of the trio also does a specialty turn. Father Coughlin sings: 'Love Thy Neighbor.' Senator Long performs a political contortion by straddling a fence, keeping an ear to the ground, and playing 'Every Man a King' on the big bassoon— all at the same time. General Johnson does an interpretive dance, 'The Dying Eagle,' in the manner of Mary Wigman."
[Picture distributed by the Newspaper Enterprise Association] 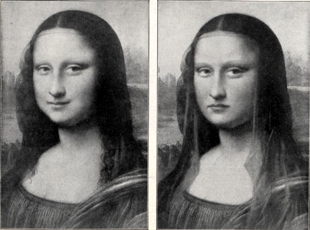 Mona Lisa Smiles on Demand (1935) The Berliner Illustrirte Zeitung reported the discovery that Leonardo da Vinci had originally painted the Mona Lisa frowning, not smiling. As a result, the Louvre had restored the painting to its original condition. But because the Mona Lisa's unhappy scowl seemed to rob the painting of much of its charm, the museum's directors were considering changing the frown back into a smile. 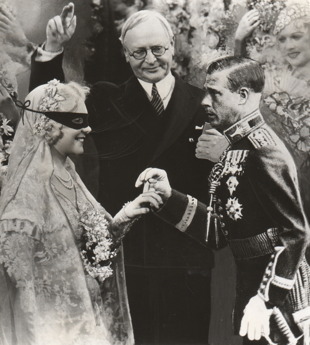 Prince of Wales Weds Princess ‘X’ (1935) "H.R.H. Edward, Prince of Wales, is seen placing a ring on the finger of his bride. Note that she is masked. This precaution was considered necessary to hide her identity from several thousand members of the Girls Who Have Danced With the Prince of Wales Association, whose protest demonstration staged outside the palace during the ceremony had reached the proportions of a riot." 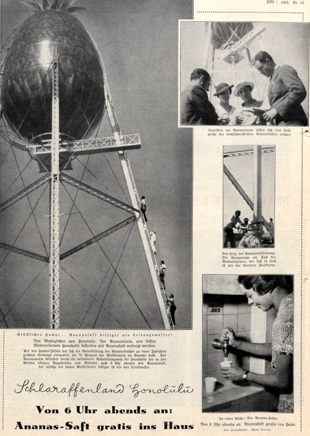 Pineapple Juice Tower (1935) The Berliner Illustrirte Zeitung reported that Honolulu's famous pineapple-shaped water tower, which stood over the cannery of the Dole Food Co., was actually filled with pineapple juice, not water. The juice was supplied free of charge through a "special pipe network" to the homes of employees of the pineapple company, after six o'clock in the evening. 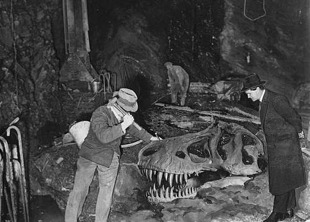 Dinosaur Found in Oslo (1935) Norway's Aftenposten newspaper reported the discovery of a gigantic dinosaur skull beneath their building in Oslo. The photo was said to show researchers examining the skull soon after its discovery.
General Categories
Regions
Recurring
Settings
Perpetrators
Organizations