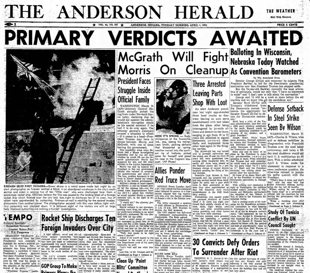 The Anderson Herald (Anderson, Indiana) reported on its front page that ten "little men" had disembarked from a "space-type rocket ship" in the south section of the city. The landing blast of their ship had caused an abandoned warehouse to catch fire. Two of the little men had been caught and were being sent to secret laboratories for examination, but the eight other men were still at large.