BMW ran an ad in the London Sunday Times announcing a new "Automatic Translation System" for its cars. This device (developed by senior technician Urbein Waundab) would, at the touch of a button, translate any of the major European languages into English. It would also automatically read and translate every road sign it passed.

People who were interested in learning more about the device were invited to contact "Huw Felvret" at BMW Information Service. 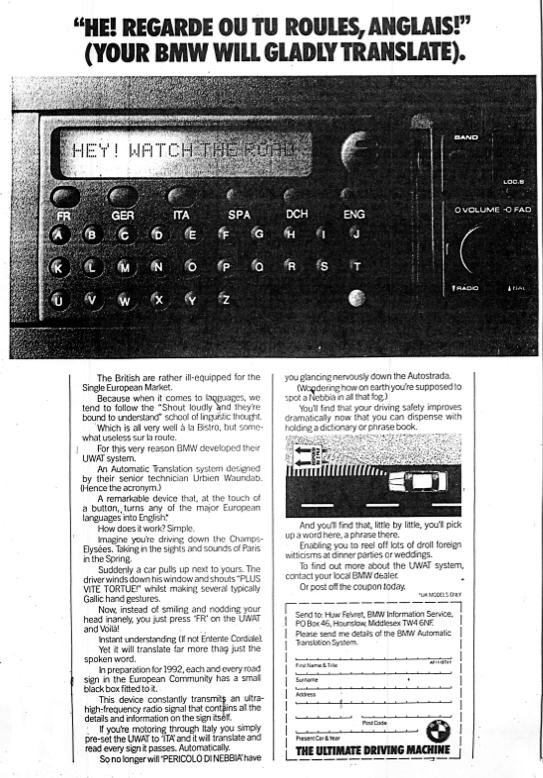 By 1990, BMW had already established a decade-long tradition of spoof ads on April Fool's Day. The ad also contained textual clues indicating it was a joke, such as the names Urbein Waundab (you're being wound up) and Huw Felvret (you fell for it).

Nevertheless, the ad managed to fool a writer for the magazine New Scientist, who devoted a large part of that publication's "Ariadne" column (in the Apr 21 issue) to asking critical questions about the translation device.

The author of the column criticized the device's translations as lacking "a certain flavour." He also feared the translations would be too slow.

But most of all, he worried that on-the-spot translations might lead to conflicts between French and English drivers:


A glance at the automatic translation of the sentiment would be enough to enrage the normally placid and polite English driver, whose fame as a model of civilised behaviour is deservedly worldwide and on display in the streets and motorways every day of the week, including Sundays. It is on the cards that, goaded beyond tolerance by the insults of what every Englishman anywhere abroad considers a foreigner, he would invite the Frenchman to wait a moment or two while he tapped out some sentiment in colloquial terms for translation into French, but I doubt whether the words usually employed in such circumstances are allowed for in the BMW's memory.

In the following week's issue, in response to numerous letters from readers, the author of the column admitted that, no, he hadn't been playing along with BMW's joke. He had been genuinely fooled. He offered this explanation:


There were warning indications that I ignored, convinced as I am that anything that can be done by electronics will be, whether it makes sense or not. Too much scanning of the devices on offer from mail-order firms, such as electronic Bibles and voice-synthesising dictionaries, must eventually rot the critical faculties. Besides, the advertisement was handed to me ripped from its page. No date on it. A faint bell rang at this moment, because the hander accompanied the action with a sound that only the word invented by Lewis Carroll can describe. He chortled. But my ecstatic reaction silenced the tinkling. Further, who would have thought that a German firm would have gone to such lengths and expense, such elaboration, in the British press?

These, though, are explanations, not excuses. I was caught, conned, gulled, fair and square. In time, the wound will heal, no doubt.

Text of the ad

The British are rather ill-equipped for the Single European Market.

Because when it comes to languages, we tend to follow the "Shout loudly and they're bound to understand" school of linguistic thought.

Which is all very well a la Bistro, but somewhat useless sur la route.

For this very reason BMW developed their UWAT system.

A remarkable device that, at the touch of a button, turns any of the major European languages into English.

How does it work? Simple.

Imagine you're driving down the Champs-Elysees. Taking in the sights and sounds of Paris in the Spring.

Suddenly a car pulls up next to yours. The driver winds down his window and shouts "PLUS VITE TORTUE!" whilst making several typically Gallic hand gestures.

Now, instead of smiling and nodding your head inanely, you just press 'FR' on the UWAT and Voila!

Instant understanding (If not Entente Cordiiale).

Yet it will translate far more than just the spoken word.

In preparation for 1992, each and every road sign in the European Community has a small black box fitted to it.

This device constantly transmits an ultra-high-frequency radio signal that contains all the details and information on the sign itself.

If you're motoring through Italy you simply pre-set the UWAT to 'ITA' and it will translate and read every sign it passes. Automatically.

So no longer will 'PERICOLO DI NEBBIA' have you glancing nervously down the Autostrada. (Wondering how on earth you're supposed to spot a Nebbia in all that fog.)

You'll find that your driving safety improves dramatically now that you can dispense with holding a dictionary or phrase book.

And you'll find that, little by little, you'll pick up a word here, a phrase there.

Enabling you to reel off lots of droll foreign witticisms at dinner parties or weddings.

To find out more about the UWAT system, contact your local BMW dealer.