The Great Wall of China Hoax

On 25 June 1899, four Denver newspapers reported that the Chinese government was going to tear down portions of the Great Wall of China, pulverize the rock, and use it to build roads. Frank C. Lewis, a representative of a syndicate of Chicago capitalists, was credited as the source of this information. He had supposedly shared the news with reporters in Denver while en route to China to bid on completing the demolition project. 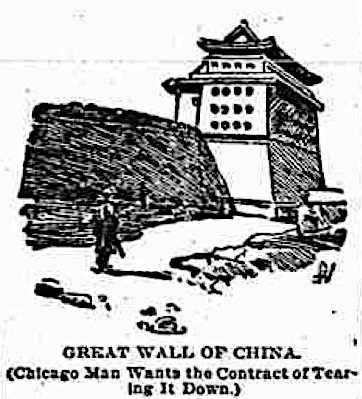 Illustration from the Lima News, August 4, 1899.
Within days newspapers throughout the country picked up the story -- which they regretted when it became apparent that the news was not true. The Chinese were not planning to tear down the Great Wall.

Eventually the full details of the hoax were revealed. Four Denver reporters -- Al Stevens, Jack Tournay, John Lewis, and Hal Wilshire -- had invented the tale while sharing a drink at the Oxford Hotel in order to spice up a slow news day.

The entire incident might have been remembered as nothing more than a minor media hoax. Newspapers during this period in American history were full of invented stories. However, the punchline of this hoax was still to come.

Decades later a rumor began to circulate suggesting that when the news reached China, the Chinese had become so furious at the idea of Americans tearing down the Great Wall, that they took up arms against Westerners in retaliation. This, the rumor claimed, was the cause of the Boxer Rebellion.

The tale of how a hoax started the Boxer Rebellion proved especially popular with preachers, who to this day continue to use it as a morality tale to demonstrate the "power of the tongue" -- or how "your mouth gets you in trouble." However, there is no evidence that the rumor is true. The 1899 hoax does not appear to have had any influence on events in China. 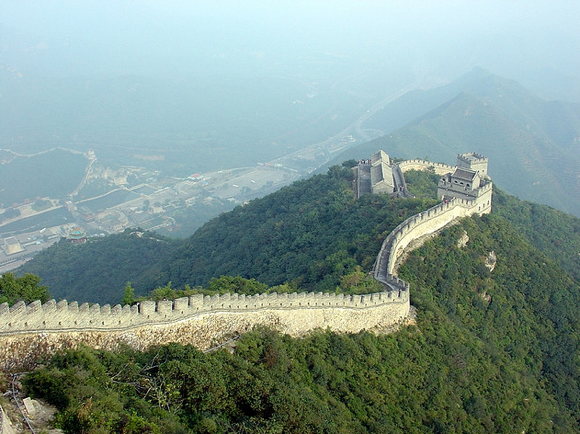 Image credit: Jeremy Rover
Creation of the hoax
The only source of information about the creation of the hoax is an article published by the Denver-based songwriter Harry Lee Wilber in 1939. Wilber is not an entirely credible source (as will subsequently be shown). However, there is no reason to doubt the general facts he provides about the origin of the hoax.

According to Wilber, the idea for the hoax started when four reporters from the major Denver papers (the Republican, the Denver Times, the Denver Post, and the Rocky Mountain News) met by chance at the train station on a "bleak Saturday night." They had each been assigned to cover the downtown station and hotels, but confessed to each other that they had no story for the Sunday edition.

Al Stevens declared that he was going to invent something. The other three agreed they would too.

The four men walked over to the bar at the Oxford Hotel, where they hatched their plan. Instead of inventing four separate stories, they decided to conspire to create one big one.

They brainstormed ideas: perhaps a Wall Street firm planning to build a steel mill to compete with the Colorado Fuel & Iron Company, or the kidnapping of a rich debutante. Too fantastic, they decided. One of them noted that a foreign story would be more difficult to debunk, so they began thinking of which country to locate their story in: Russia, Germany, Spain, Holland, Japan? Then it came to them in a flash. China would be perfect!


Lewis exclaimed, "What's the matter with the great Chinese wall? That sacred pile hasn't been in the news for ages. Why not a story around it?"

The idea fascinated. Lewis continued: "Let's tear it down!"
And so they came up with the story of an American businessman en route to China to bid on the demolition of the Great Wall. To bolster the credibility of their story, they walked over to the Windsor Hotel where they convinced the clerk to record in the register that a party of engineers had stayed there.

Finally, the reporters made a pact that they would tell no one of their scheme "during their lifetime." Then they each went their separate way to write up the story for the next day's news.


Text of the hoax
It has not been possible to access archival copies of the Denver newspapers. However, on June 26, 1899 the Chicago Daily Tribune printed what appears to be the verbatim text of the Denver hoax:


PLAN TO RAZE CHINESE WALL
_______
Frank C. Lewis Seeks Contract for Chicagoans--Mayor Harrison Said to Be Interested, but Laughs at It.

Denver, Colo., June 25.--[Special.]--Frank C. Lewis of Chicago was at the Oxford Hotel last night. Mr. Lewis represents a syndicate of Chicago capitalists and is on his way to Peking, China, for the purpose of negotiating with the Chinese government with a view to tearing down a portion of the Chinese wall.

"I lived in China for four years," said Mr. Lewis, "and during that time was interested in building a great many miles of railroad. While in that country the subject frequently was discussed by those in power as to the advisability of tearing down at least a portion of the historic wall and using the stone for the purpose of making a roadway to Nankin. The idea was to pulverize the rock and use it in the roadways. While it is not an assured fact that we will secure the contract we are now figuring on I am inclined to the belief that it is a possibility. The company I represent has a capital of $650,000 in cash, and I have been instructed to use every effort to secure an opportunity of doing the work.

"Some of the wealthiest and best known capitalists of Chicago are interested in this enterprise."

While Mr. Lewis would not give the names of those interested in the company it is believed here that Mayor Harrison and numerous other prominent men are interested in the proposed plan. Mr. Lewis left for the West at 4 o'clock this morning.
_______
At the residence of Frank C. Lewis, 2100 Orrington avenue, Evanston, last night, it was stated that Mr. Lewis had left Chicago for Pittsburg. Members of his family said they had heard of the Chinese wall project, but that Mr. Lewis was not going to China. They declined to give details.

Mayor Harrison laughed when asked if he were interested. He said he was too busy at home to bother about China's ancient ramparts.
Response
Within days, the news of the imminent destruction of the Great Wall of China had appeared in papers throughout America. Papers that reported it included the Chicago Daily Tribune, Portsmouth Herald, Fort Wayne Sentinel, Lima Daily News, Newark Daily Advocate, Washington Post, and the New York Times. Of these papers, only the New York Times questioned the story's veracity.


If there is anything which modern China can safely be assumed to regard with respect and devotion it is that famous wall, so ancient, so useless, so queer, and so inconvenient. Like most other things in China, its material is such as to preclude the idea of employing it in making things of present necessity, and that is another reason why the reported scheme is incredible and incomprehensible. And if the Chinamen had decided to destroy the noblest embodiment of Chinese instinct and policy, why shouldn't they do it themselves? Though they may lack the energy requisite for building so large and remarkable a structure, still they would have no difficulty in tearing it down.
As the story continued to spread, many newspapers elaborated on it, inventing new details. For instance, the Fort Wayne Sentinel claimed that the bricks from the wall were to be used to build dikes to contain the Yangtse River. The Newark Daily Advocate wrote that the proposition to demolish the wall came from the dowager empress of China herself.


The Boxer Rebellion Rumor
Wilber's 1939 article appears to be the first time that a connection was made -- at least, in print -- between the 1899 hoax and the Boxer Rebellion in China. Here is Wilber's version of events:


Several years passed. Bishop Henry W. Warren of the Methodist Episcopal church returned to the States from China. He was delivering a lecture on conditions in the Orient at the Trinity M.E. Church in Denver. Wilshire was assigned to report on the lecture.

"You may not realize, friends," said the learned Bishop, during his introductory remarks, "the power of the printed word. Bad news and false news pick up added fuel and eventually blaze devastatingly..."

Nothing yet of interest here. Then --
"As an example of the havoc that can be wrought, take the 'Boxer Rebellion.' The spark that set off the tinder in that terrible war was struck in a town in Western Kansas or Nebraska (it was Colorado) by three (four, you will remember) reporters who concocted and printed a wild yarn, for what reason I have never been able to find out, that the huge sacred Chinese Wall was to be razed by American engineers, and the country thrown wide open to hated foreigners."

In a rear pew, Wilshire almost fell from his seat as he listened:

"This pure canard reached China and the newspapers there published it with shouting headlines and editorial comment. Denials did no good. The Boxers, already incensed, believed the yarn and there was no stopping them. It was the last straw and hell broke loose to the horror of the world. All this from a sensational but untrue story."
In 1956 Wilber's article was reprinted in Great Hoaxes of All Time, edited by Robert McBride and Neil Pritchie. The tale of how an American newspaper hoax caused the Boxer Rebellion in China was subsequently retold by many authors (and preachers), all of them apparently relying on Wilber's article for their facts.

However, there are a number of problems with Wilber's facts. First of all, it is doubtful that the Boxers were ever aware of the Denver newspaper hoax. Not a single history of the Boxer Rebellion has ever suggested that the hoax may have played a role in events.

Second, Wilber describes Bishop Henry Warren as being the source of information about the role the hoax played in the Boxer uprising. Warren was a well-known methodist Bishop, but according to contemporary newspaper accounts, he spent most of 1899 in South America hospitalized for appendicitis. There is no indication he was in China during the Boxer Rebellion.

It is possible that Wilber himself invented the connection between the Denver hoax and the Boxer Rebellion. If so, he was guilty of the old journalistic strategy of taking a good story and "improving" it.

But it is also possible that Wilber merely reported a rumor that had been circulating by word of mouth. If this is the case, there is a possible explanation for the origin of the rumor. At the start of the twentieth century, American newspapers often spoke of the need to tear down the Chinese wall of tariffs and protectionism in order to allow American companies access to the Chinese market.

Someone, perhaps a missionary, may have heard that the Boxers were angry about foreign demands to tear down the Chinese wall of protectionism, but misunderstood it to mean that the Boxers were angry over demands to tear down the Wall of China. Thus, the rumor may have been born.
Links and References
Media Hoaxes Hoaxes by Journalists Newspapers and Magazines 19th-Century Hoaxes (1850-1900)
Tweet

There don't seem to be any details on any consequences, if any, for the reporters who hatched the Great Wall of China hoax. Fascinating history for students of journalism,
Posted by Astro Gremlin  on  Tue Oct 02, 2012  at  03:42 PM