An image of an enormous cat (approximately the size of a large dog) being held in the arms of a bearded man began circulating around the internet in early 2000. The picture attracted attention because it didn't seem possible for a cat to be that large, but the chance that the cat was real couldn't be ruled out either. 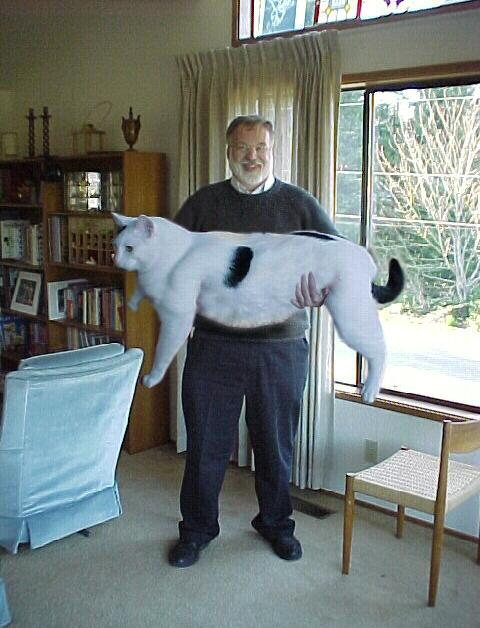 At first the picture stood alone without explanation, but at some point an unknown prankster added a caption to the image, claiming it showed "Snowball," a monster cat owned by one Rodger Degagne of Ottawa, Canada. Mr. Degagne had supposedly adopted Snowball's mother (a normal-sized cat) after finding her abandoned near a Canadian nuclear lab. She later gave birth to Snowball, who proceeded to grow into the oversized, 87-pound cat "Mr. Degagne" was shown holding.

The photo attracted so much attention that it was eventually featured on television shows such as NBC's The Tonight Show with Jay Leno and ABC's Good Morning America. However, both Snowball's story and her picture were fake. In May 2001 Cordell Hauglie, a resident of Edmonds, Washington, came forward to admit that 'Snowball' was actually his daughter's cat. The cat's real name was 'Jumper,' and it only weighed twenty-one pounds. To prove he was telling the truth, Hauglie produced pictures showing him holding the actual-sized Jumper, as well as a picture of Jumper sitting in a window.

Hauglie explained that he created the fake image by using widely available photo manipulation software and had then e-mailed the image to a few friends as a joke, never intending that it would pass beyond those friends. But a few months later the picture had spread worldwide. Hauglie only realized what had happened when the picture started appearing on TV shows, in newspapers, and in magazines. To his amazement, he had unintentionally become an internet celebrity simply by sharing a joke with a few friends.

Hauglie reports that the picture made him famous among cat lovers, and that he has frequently been invited to attend cat shows as a celebrity guest.

Big cats make great pets,
And make great conversation,
but think of the Hairballs!
(by J)