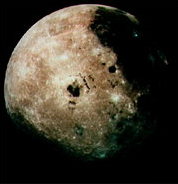 Nature.com reported that images of the Moon taken by the Floating Optical Orbital Lens (F.O.O.L.) revealed the moon to be disintegrating. The cause was hypothesized to be bacteria left behind by the Apollo lunar mission:


"Pictures captured by an orbiting spacecraft have revealed that the Moon is being heavily eroded. Images of the lunar surface reveal deep cracks and holes that are slowly but surely releasing gas and dust into space. 'This is serious,' says Brad Kawalkowizc, an astrogeologist from the Sprodj Atomic Research Centre in Belgium, who has analysed the pictures. 'There really is less Moon up there than there used to be.' If the process continues, he adds, the Moon could eventually crumble away to nothing."
Space and Astronomy-Themed April Fool's Day Hoaxes April Fool's Day, 2005
Tweet