The Damp Spot That Hoaxed D.C.

F. Rodman Law
Frederick Rodman Law (1885-1919) was a well-known daredevil active in the early 20th century. His stunts included parachuting from the top of the Statue of Liberty and jumping off the Brooklyn Bridge. In late April 1912, he requested permission to parachute from the top of the Washington Monument, but he was turned down. However, on May 7, 1912, a pedestrian standing on the corner of Fourteenth and F streets exclaimed that Law appeared to be scaling the monument without permission — and was already a third of the way up.

The pedestrian drew attention to a dark figure on the side of the monument. Soon a huge crowd, numbering in the hundreds, had gathered to watch the feat. For well over an hour people stared and squinted at the figure. Many members of Congress came out of their offices to witness the event, as did officials from the State and Treasury departments and many newspaper reporters. But when the police arrived at the base of the monument to apprehend Law when he came down, they realized that what had resembled a human figure from a distance was actually a damp spot on the side of the monument caused by the previous night's rain. The pedestrian who had originally called attention to the spot had, by that time, disappeared. 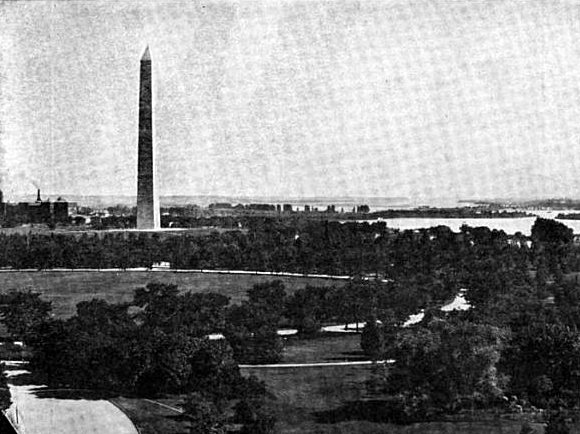 View of Washington Monument, circa 1912
The Notorious Rodman Law

Law parachutes from the Statue of Liberty
F. Rodman Law (most references to him drop his first name) was by trade a steeplejack, which meant that he built and repaired steeples and towers. It was a profession that required good climbing skills, no fear of heights, and lots of courage.

He first began performing death-defying stunts in 1909 when he climbed the side of New York City's Flatiron building, without ropes. By 1912 he had acquired a national reputation as a daredevil. The media often referred to him as the "human fly" or the "human spider".

Law performed a number of highly publicized stunts during the first months of 1912. In February he parachuted from the top of the Statue of Liberty — a stunt for which the movie company Pathe paid him $1500, making him the first movie stuntman in history. He followed this by successfully jumping off the Brooklyn Bridge, scaling the side of the McAlpin Hotel unaided, and leaping from an airplane.

In late April, Law showed up in Washington DC, seeking permission to jump from the top of the Washington Monument using a parachute of his own design. However, permission was denied.

Apparently annoyed by this rejection, Law then decided to climb the side of the Raleigh Hotel on Pennsylvania Avenue — a stunt that he provided no warning he was going to perform. On May 1, he simply leapt onto the side of the building from the sidewalk and started climbing up. The hotel management realized what was going on when they began receiving complaints from guests about a "peeping tom" outside their windows. The hotel staff tried to grab him by leaning out various windows, but Law always moved out of their reach. Four times during his ascent, while clinging to the side of the building, he stopped to casually roll and smoke a cigarette. Finally, upon reaching the ninth floor, Law agreed to come inside, and he rode the elevator down.

Upon reaching the ground, Law reiterated his desire to jump from the Washington Monument.

(left) Law climbs New York's McAlpin Hotel; (right) The Raleigh Hotel
The Non-Ascent of the Monument
At around 1:30 pm on Tuesday May 7, 1912, a pedestrian on Fourteenth street (his identity remains unknown) began gazing intently at the Washington Monument. Soon he had attracted attention. Others paused to see what he was looking at. People asked him what he saw. According to The Day Book magazine, he replied: "There! Now! Rodman Law! Wait till the sun shines! Now! Now that black speck! See it? That's Rodman!"

Once he had pointed it out, those around him also saw the speck on the side of the monument, and they interpreted it as being Law.

Quickly the crowd grew in size. Office workers, seeing the excitement, came out onto the street. People speculated about how Law could be scaling the 555-foot monument, since its sides are smooth. Some theorized that he was using rubber suction cups. A few, who had procured binoculars, insisted they could see him using a rope. A handful of people also claimed to have seen him begun his ascent.

The weather aided the illusion. The Day Book noted, "The sun was dodging behind clouds half the time, and this helped by giving the illusion that the speck was moving."

Within half-an-hour, word of Law's ascent had spread throughout downtown Washington DC, and thousands of people were looking at the monument. Employees from various government departments (State, War, Navy, Treasury, and even the White House) came outside, lured by the excitement. People stood on steps, leaned out of windows, and climbed up to rooftops to better see Law's progress.

Even members of Congress joined the crowd. The Washington Post reported, "At the Capitol, among those who watched the damp spot, thinking it to be the 'human spider,' were Representatives Fitzgerald, Bartlett, Rubey, Howard, McCall, Cline, J.M.C. Smith, Ashbrook, Martin, of Colorado; Lamb, Morrison, Stephens, of Texas; Borland, Weeks, and Roberts, of Massachusetts. To give a full list of the high officials who watched the damp spot that gave an imitation of a man climbing the Monument, however, would be to reprint most of the Congressional Directory."

After an hour, over 50 reporters were also milling around. One newspaper issued an extra stating, "Rodman Law began the ascent of the Washington Monument today at 1:28 pm, barely eluding the grasp of a policeman who tried to stop him."

But meanwhile, those who had walked over to the base of the monument discovered they could see nothing. Where Law was supposed to be there was simply a damp patch facing the Capitol that had remained wet following the previous night's rain. Eventually this news made its way back to the disappointed crowd around the Capitol.

The Washington Post summed up the episode by noting that, "a huge damp spot, left by some freak of the stone in drying after Monday night's rain, yesterday gave a two-hour entertainment to the Capital City that rivaled the Barnum & Bailey circus."


Prank or Pareidolia?
The Day Book suggested that the pedestrian who originally called attention to the damp spot (the magazine referred to him as a "funny gink") had purposefully pranked the entire city. At a time before the widespread adoption of cars, when downtown streets contained more pedestrians than today, street pranks were a common feature of popular culture. And there was a well-known prank that involved standing and staring upwards (at the sky or a rooftop) in an attempt to lure "rubberneckers" into stopping and trying to see what was worth staring at. Once a sufficient crowd of rubberneckers had formed, the prankster would make his escape.

If the Washington Monument episode was a case of a prankster ensnaring rubberneckers, it was the most successful instance of the prank ever. But since there really was an ambiguous spot on the side of the monument, it seems more likely that the pedestrian who originally called attention to it was just as fooled as everyone else. After all, why would he have known what it really was?

In which case, the Washington Monument episode is a case of mass pareidolia. That is, thousands of people simultaneously misinterpreted an ambiguous visual stimulus as being more significant than it really was. They mistook a damp spot for a man.

The event also illustrates the psychological phenomenon of social proof, in which people rely on the opinions of those around them in order to interpret an ambiguous situation. In this case, since people heard from those around them that Law was scaling the monument, they believed that was what they were really seeing. The phenomenon of social proof can also be seen in cases of mass panic, such as the reaction to the 1938 War of the Worlds broadcast.


Law's Further Exploits
Rodman Law never did scale the Washington Monument or parachute from its top. However, his adventures as a daredevil continued.

In 1913 he performed his most notorious stunt when he tried to launch himself 3000 feet in the air by means of a self-designed rocket. This stunt went badly wrong when the rocket exploded on the ground, leaving him burnt and injured. However, he recovered, and a few months later he climbed the side of the Capitol Dome.

However, ultimately it wasn't his stunts that did Law in. He died in 1919, at the young age of 33, of pulmonary tuberculosis.
Links and References
Pranks Hoaxes of the 1910s
Tweet