The Boy with the Golden Tooth 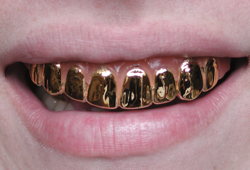 In 1593 reports began to spread of a young boy in Silesia, seven-year-old Christoph Müller, who had grown a golden tooth. Jakob Horst, a professor of medicine at Julius University in Helmstedt, decided to investigate. He found the boy did indeed have a gold tooth set firmly in his jaw. Tests with a touchstone (a small tablet of dark stone on which soft metals such as gold leave a visible trace) confirmed the gold was real, though not as high quality, Horst noted, as Hungarian gold.

Horst wrote a 145-page treatise about the case, De aureo dente maxillari pueri Silesii (Of the Golden Tooth of the Boy from Silesia), in which he attributed the golden tooth to astrological causes. He noted that the boy was born on December 22, 1585, when there was an unusual alignment of the planets that must have increased the heat of the sun, causing the bone in the boy's jaw to turn to gold. He also argued that the tooth was a portent of important events to come: the dawn of a new golden age for the Holy Roman Empire. However, because the tooth was located on the boy's left side, considered to be the sinister side, the golden age would be preceded by many calamities. 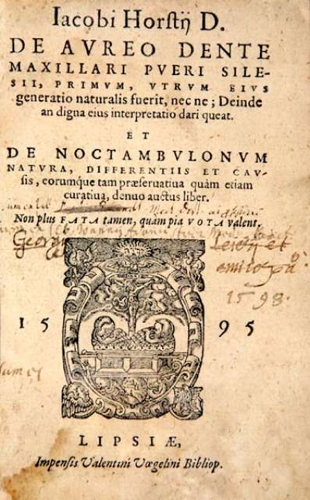 Jakob Horst's De aureo dente maxillari pueri Silesii
Not all doctors agreed with Horst's opinion. Duncan Liddell, a Scottish physician living in Helmstedt, published his own analysis of the case, Tractatus de dente aureo pueri Silesiani, in which he argued that the boy's golden tooth had to be man-made.

Time confirmed Liddell's analysis to be correct. The daily pressure of chewing, combined with the repeated tests with a touchstone, wore down the gold enough to reveal that it was merely a thin layer of metal skillfully fitted over the boy's tooth. At first the boy attempted to conceal this by refusing to allow any more learned gentlemen to examine his tooth. However, a drunken nobleman became enraged when his request to see the tooth was refused, and he stabbed the boy in the cheek. When a doctor came to suture the wound, he discovered the fraud.

Christoph was taken to prison, and the man who fitted the gold layer over his tooth reportedly fled. But despite having been created for deceptive, not therapeutic, reasons, the golden tooth earned a distinguished place in the history of dentistry. It is considered to be the first documented case of the creation of a gold crown for a tooth.
Links and References
Medical Hoaxes Early Modern Hoaxes Astrology
Tweet