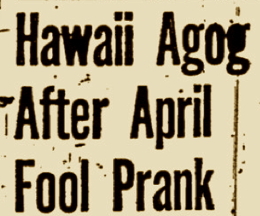 Hal Lewis, disc jockey on Hawaiian station KHON, announced that the Senate had repealed islanders' income taxes and provided for return of 1953 taxes. The announcement elicited a huge reaction. Radio stations, newspapers, and the Internal Revenue Bureau were all flooded with calls from people seeking more information. Many banks received calls from people who wanted to place orders for stock and bond purchases with their forthcoming refund.

Lewis's announcement was believable because a tax refund for Hawaii had recently been in the news. Hawaiian congressman Joseph Farrington had, less than a month before, demanded that the islanders be given a refund of all the federal taxes they had ever paid if Hawaii was not granted full statehood. (Hawaii was made a state in 1959.)

Later in Lewis's show, the General Manager of KHON came on the air to publicly apologize for the hoax announcement and fire Lewis. However, the audience responded with sympathy for Lewis, and many called in to urge the station to reconsider. But it turned out the "firing" was also a hoax. The "general manager" was actually one of Lewis' colleagues, Buck Buchwach.

IRS agent Stanley McKenney subsequently called the station and asked them to leave his office out of any further pranks. He said his office was busy enough processing the 1953 returns, without having to deal with numerous calls from people seeking a refund.

Lewis, who was the most popular dj in Hawaii, also went by the name "J. Aukhead Pupule," which was Polynesian for "Crazy Fishhead".