Virginia news station WSLS 10 recently ran a 'myth buster' segment on whether putting a bar of soap between your sheets can ease nighttime leg and foot cramps. To my surprise, they concluded that, yes, a bar of soap does seem to help some people, even though there is "no scientific evidence" for why this would work. 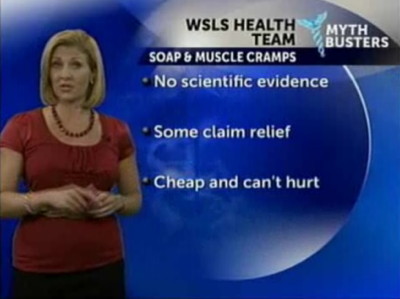 Just to clarify, the claim is that merely having a bar of soap near your muscles at night can stop them from cramping. The brand of soap doesn't seem to matter much, though some people express individual preferences. (Irish Spring is a favorite.) The soap should also be in close proximity to the cramping muscle. Some people say that if cramping starts, they simply adjust their position so that the soap is making contact with the muscle, and the cramping and pain stops. 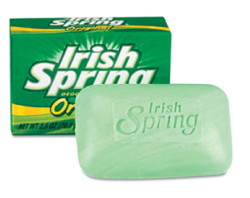 To say that there's "no scientific evidence" for this claim seems like an understatement. The idea sounds totally absurd. However, a quick google search reveals a large number of people who, despite initial skepticism, now swear by the method. Even Snopes lists the claim as 'undetermined'. So what could be going on here? Could soap actually have muscle-calming properties?

The most obvious theory is that the cramp relief is simply a placebo effect. People believe that it'll work, so it does. But it seems premature to dismiss the phenomenon in this way. Perhaps there is some strange bio-chemical effect at work.

Unfortunately, there's been very little scientific investigation of the soap phenomenon. The one relevant study I could find was published in the Journal of Alternative and Complementary Medicine. Dr. Yon Doo Ough (of Beloit Memorial Hospital in Wisconsin) and colleagues investigated whether soap-scented skin patches could ease menstrual cramps. Their study was directly inspired by soap's use in preventing nocturnal leg cramps. They theorized that it was the smell of the soap, not the soap itself, that was having the antispasmodic effect. So they applied soap-scented oil to skin patches and tested them on women with a history of severe menstrual cramps. The women reported that the patches did help.

The researchers might be on to something with their scent theory. A few years ago, over at Weird Universe, I posted about a study published in the journal Clinical Neurology and Neurosurgery that looked at whether stinky shoe smell could be an effective treatment for epilepsy. For centuries, it's been part of folk medical practice in India to arrest epileptic seizures by forcing the person having the seizure to smell stinky shoes. The researchers concluded, to their surprise, that the technique worked. They wrote, "strong olfaction applied in the form of 'shoe-smell' did definitely play a suppressive role and thus exerted an inhibitory influence on epilepsy."

If a strong smell can suppress an epileptic seizure, perhaps it can also suppress the perception of pain and cramps. The brain works in mysterious ways. It would be interesting to test whether sleeping with a stinky shoe also eases cramps. In fact, will any strong smell have the same effect?

So until a better theory comes along, I'm willing to accept the possibility that soap between the sheets might ease cramps — perhaps because the smell somehow tricks the brain into ignoring the pain and suppressing the cramping response. Though the mystery is why applying the soap directly to the muscle seems to help. Would it be equally efficacious to put the soap directly to your nose?

As the WSLS myth-buster segment pointed out, the technique is cheap and harmless. So if you suffer from nocturnal leg cramps, I guess it's worth a try. There's nothing to lose. Though, inevitably, there are people trying to make a buck off this home remedy. Last year, one guy filed a patent for a pain-relief "soap cushion" (depicted below) that has compartments into which pieces of hard soap can be inserted. Is that really patentable? 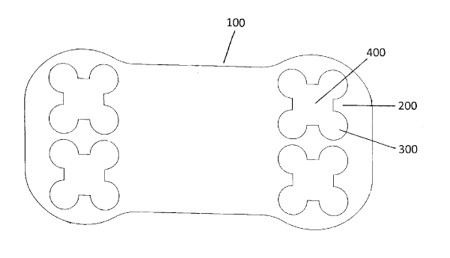 I can't even normally stretch my left leg in bed without an agonizing cramp. All that works to stop it is to stand up. Which is harder than it sounds, as half my brain screams that doing that will make it worse.

What do they mean by "the soap is making contact with the muscle"? Pushing down on it? The pressure might do something, especially if it works wearing pajamas. And no, I'm not volunteering to try this theory out! I don't go by "No Pain, No Gain" but "No Pain, No Pain".
Posted by Bill the Splut  on  Wed Aug 22, 2012  at  10:28 AM
I wear knee and ankle braces when I leave the house, and I'm never entirely sure whether the support or just the extra insulation from having the fabric/whatever wrapped around my joints helps more. If heat is helping, though, then the "being in contact with the muscle" thing might be helping that way. So might the tape stuff on the olympians in another of your entries, really.

I hadn't heard of the soap smell helping with cramps. I'll try it next time something cramps up!
Posted by Ow  on  Thu Aug 23, 2012  at  02:17 PM
I would wonder if the brand of soap favored by each individual would happen to be the same they use in the show.

Anyhow, your muscle relaxes when a cramp goes away and the shower and bath are typically considered places to relax.

I would pose then if it is the scent of the soap and not the bar itself causing this function it's a pavlovian response to the scent of the soap bringing the the body to a state similar to the one when cleansing oneself.
Posted by Chris  on  Thu Aug 30, 2012  at  02:18 PM
It should be said that "some claim relief" and "cheap and can't hurt" are the two criteria that can almost always be applied to all placebo effects (although they're not always cheap, especially after some genius patents them.)
Posted by Ella  on  Wed Oct 03, 2012  at  11:17 PM
Ugh. Stupid news station. Look, you can't trust these guys; they're like the TMZ of our area. If you want something a little better from small towns, use WDBJ 7.

I don't know if soap works or not, but bananas do. c:

Augh, I'm like, irrationally embarassed about this post now, LOL.
Posted by Russia  on  Thu Oct 11, 2012  at  03:24 PM
The People's Pharmacy radio show on NPR has mentioned this claim many times. Also of interest, is their claim that putting Vick's Vapo-Rub on the soles of your feet at bedtime can help with coughs or congestion due to colds. I've actually used this on myself and my kids and it seems to help.
Posted by Thom Dunbar III  on  Sat Dec 08, 2012  at  05:44 PM
I ridiculed this for a year before trying it recently and have not had a cramp since. I had excruciating leg cramps for about 8 years progressively becoming worse and worse. I don't have them any more. I'm not trying to convince anyone of the plausibility. I'm just thankful I'm sleeping again. I am thankful but bewildered.
Posted by Tom Weston  on  Mon Dec 31, 2012  at  06:58 AM
This is a pretty simple and specific procedure -- isn't there a school or hospital that could do a simple test of the efficacy of this? This isn't advanced rocket science, and a simple double blind experiment with a couple of dozen people and a few brands of soap should indicate something. That would be a good start. What is holding back the research on this -- it's really not an expensive test (unless you buy boutique soaps).
Posted by RM  on  Fri Apr 19, 2013  at  10:33 AM
I have tried everything to help with muscle spasms and cramps in my legs at night for years. I searched it on the internet and came across this thing about putting a block of soap in between the sheets by the feet at night. After YEARS( 1996 to be exact), I decided I would try anything. Been 5 nights now and not a cramp or muscle spasm have I had at night since. Haven't been sleeping well since 1996 but now, that I have been using the soap at night, I have been sleeping.
Posted by Katie  on  Sun Oct 06, 2013  at  09:51 PM
Commenting is not available in this channel entry.