The Kingsport Times (of Kingsport, Tennessee) ran a photo on its front page of what it said was Field Marshal Erwin Rommel's "escape ship," spotted going down the local Holston River. It said the ship had entered the Holston River by way of the Gulf of Mexico. 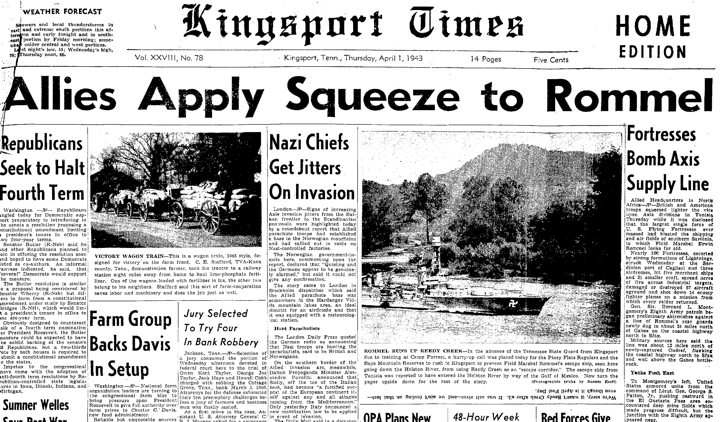 ROMMEL RUNS UP REEDY CREEK — In the absence of the Tennessee State Guard from Kingsport due to training at Camp Forrest, a hurry-up call was placed today for the Piney Flats Regulars and the Bays Mountain Reserves to rush to Kingsport to prevent Field Marshal Rommel's escape ship, seen here going down the Holston River, from using Reedy Creek as an "escape corridor." The escape ship from Tunisia was reported to have entered the Holston River by way of the Gulf of Mexico. Now turn the paper upside down for the rest of the story.

(upside-down text:)
We're sorry, it wasn't Reedy Creek after all. It was salt river — and we ain't fooling on that last — even though it is April Fool Day.
April Fool's Day, 1943
Tweet