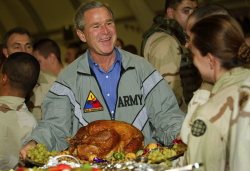 President Bush made a surprise visit to the troops in Iraq on Thanksgiving Day, 2003. While there he helped serve them a traditional holiday dinner. The most widely published image from the trip showed him grinning as he carried a tray bearing a beautiful golden brown turkey. The photo was taken by pool photographer Pablo Martinez Monsivais. The president's popularity rose in polls conducted soon after the trip.

What news audiences were not immediately told (but which Mike Allen, a Washington Post reporter who had traveled to Baghdad with Bush, later revealed) was that the turkey Bush was carrying was actually a decorative centerpiece known in the food service industry as a "trophy turkey." The food the soldiers actually got was served from cafeteria-style steam trays.

There were no allegations the photographer had staged the scene. Apparently Bush spontaneously picked up the turkey, and the photographer snapped the picture. But the media was criticized for disseminating an image that gave a misleading view of the Thanksgiving event.

Many people (including this site and The New York Times) mistook Allen's revelation to mean that the turkey Bush was carrying was a plastic prop. However, this was not the case. Allen specified that the turkey had been "roasted and primped." In other words, it was real, but not intended for consumption by the troops. The New York Times published a retraction, noting this error, on July 11, 2004.
Links and References
Allen, M. (Dec 4, 2003). "The bird was perfect, but not for dinner." The Washington Post.
Photo Categories: False Captions, Food, Military, Photojournalism, Politics, 2000-2004
Tweet