Interior of the Secundra Bagh 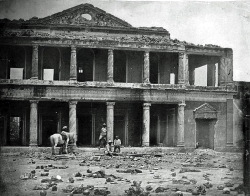 In November 1857 British forces put down an Indian rebellion in Lucknow (northern India). Two thousand sepoys who had holed up in the Secundra Bagh Palace were killed. The British buried their own dead, but they left the Indian dead to rot.

A few months later (around March or April 1858), photographer Felice Beato arrived in Lucknow and took a photograph of the interior of the Secundra Bagh Palace. Bones of the dead can be seen in the foreground of the photo, lying exposed on the ground.

There is controversy about whether corpses actually were still lying unburied when Beato was in Lucknow. A reporter for The Times reported seeing unburied skeletons as late as April 1858. But a British officer, Sir George Campbell, wrote in his memoirs that Beato arranged for bones to be disinterred and scattered around in order to recreate the aftermath of the battle.
Links and References
• Secundra Bagh after Indian Mutiny. Wikipedia.
• Harris, David. (1999). Of Battle and Beauty: Felice Beato's Photographs of China.
Photo Categories: Staged Scene, Death, Military, War, Photojournalism, Before 1900
Tweet