Photo of a Black Lion 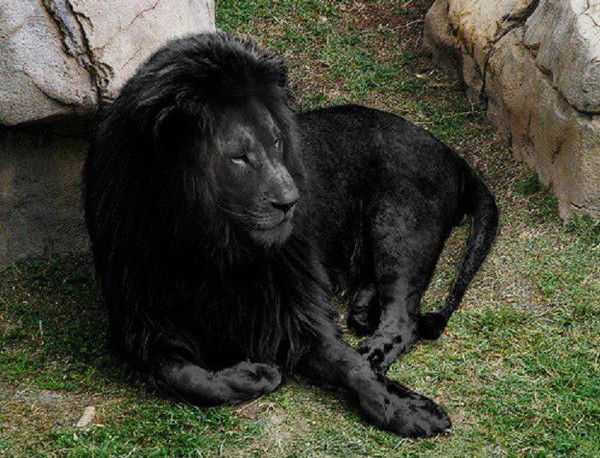 A picture of a black lion has recently been circulating online. Black lions are not biologically impossible. In fact, there have been scattered reports of black lions over the centuries. However, the lion in this picture is actually a white lion colored black through photo manipulation.

The original image of a white lion was posted at cutehomepets.com. It was then transformed into a black lion by "PAulie-SVK" and posted at deviantart.com earlier this year. From there it spread to Facebook, reddit, etc. 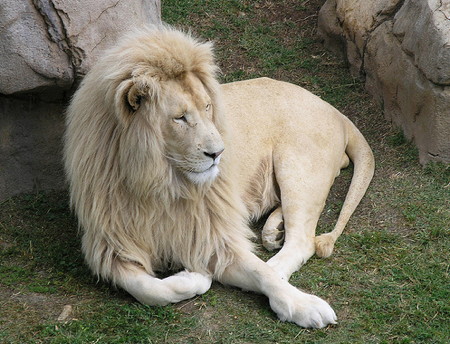 Messybeast.com offers some interesting info on the science and history of black lions:


There is a mid 19th century report of a very large "black" Persian lion seen by the archaeologist Sir Henry Layard; he described it as "very dark brown in colour, in parts almost black." Lions are no longer found in that region. This may have been related to the Barbary lion (now extinct in the wild) which is larger than African lions and famed for their extensive black manes stretching from chest to groin.

A partly black lion was born at Glasgow (Scotland) zoo, but was infertile. His colour was probably due to somatic mosaicism (abnormal skin cells). The lion had a pitch black patch extending the length of the inside front leg and across the chest. Somatic mosaicism causes some patches of skin to develop abnormal pigmentation. This anomaly also occurs in domestic cats and accounts for some of the few fertile tortoiseshell male cats.

Called "Ranger" (he was sponsored by Glasgow Rangers Football Club), he was born at Glasgow Zoo in about 1975, the offspring of some lions acquired from Manchester's Belle Vue Zoo. At birth, the lion exhibited a melanistic patch which stretched from his right paw, all the way up the inside of his leg and across his chest. It was believed to be the first time melanism, even partial melanism, had been recorded in the African lion (apart from anecdotal cases). Ranger , frequently mated but failed to impregnate a proven fertile female. Zoo staff believed he had a chromosome abnormality. Ranger was put to sleep in 1997 and sent for post mortem at Glasgow Vet School...

Black lions, chocolate brown lions and reddish brown lions have been reported. A very dark brown, almost black lion was reported in Persia (Iran) and a black lioness was reported in the African bush (Okovango). There have even been reports of whole prides of dark brown or black lions; prides comprise closely related lionesses therefore this could be a familial trait. Genetically, lions are spotted cats (residual spots can be seen on tawny lions on the limbs and sometimes on the body) and it's possible that excessively spotted cubs (abundism) might grow into adults with a sooty cast on the fur...

Many reports of black lions (and other black big cats) are due to observation in either poor light or with strong sunlight behind the cat.

P.S. so sad the plight of the Barbary lion... an irreversible loss for the animal kingdom.
Posted by Petradakia  on  Wed Apr 17, 2013  at  11:52 AM
Petradakia, it's not about "getting out of the city" or "opening the senses." (Why are you assuming these people live in the city?)

Please don't assume things about people until you know what they are saying.
Posted by Janice  on  Tue Jun 04, 2013  at  08:57 AM
Kind of thinking that the velvet-like patches of shiny and matte fur on his legs should have given away the fact that this was photoshopped?
As for nature producing "perfection"? No. Nothing natural in this world is perfect. Seriously. Have you seen a Platypus? They're beautiful, but far from perfect.
Posted by Katt  on  Sat Oct 19, 2013  at  04:55 PM
Commenting is not available in this channel entry.