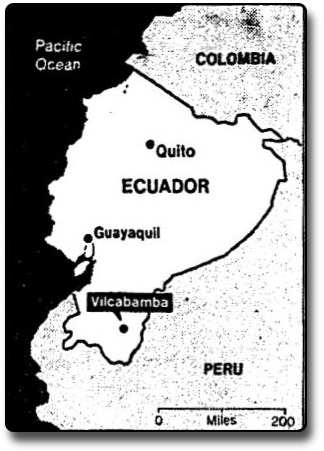 In 1970, scientists researching the link between diet and heart disease visited the small town of Vilcabamba, located high in the Ecuadorian Andes. The scientists included Dr. Alexander Leaf of Harvard Medical School, Dr. Harold Elrick of the University of California at San Diego, and a group from the University of Quito.

The scientists found that the residents of Vilcabamba, who were principally of European descent, had very low cholesterol levels and very few of them ever suffered from heart disease. But as they did more research, the scientists then discovered something even more remarkable — the Vilcabambans enjoyed incredible longevity. Many of the town residents insisted they were over 100 years old. A few of them stated their age as being over 140 years old. And these ages appeared to be verified by birth and baptismal records.

The next year the province of Loja (in which Vilcabamba was located) conducted a census that confirmed the unusual longevity of the town's residents. Out of a total population of 819, the town boasted seven men and two women older than 100 years old. One man, Miguel Carpio, said he was 123. Another, Jose David, claimed to be 142 years old.

The census also indicated that Vilcabamba had a high number of elderly people in general. 11.4% of the villagers were over 60. This compared with a rate of only 4.5% elsewhere in rural Ecuador.

Later censuses, conducted by researchers, found even more centenarians, putting the total number at 23. In a town as small as Vilcabamba, even one centenarian would have been remarkable.


International Fame
As word of Vilcabamba's "longevos" (very old people) got out, the town became an international sensation. Numerous articles promoted the town as a Shangri-la whose residents -- blessed with extraordinary health and longevity -- lived in closer harmony with nature, untouched by the stresses of modern life. Appropriately, Vilcabamba meant "Sacred Valley" in the Inca language. 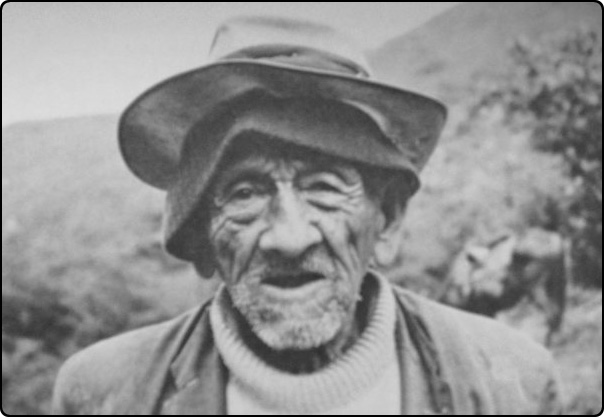 Several books published in the mid-1970s further enhanced the town's reputation. In 1975, Dr. David Davies, an English gerontologist, published The Centenarians of the Andes about his research in Vilcabamba.

In 1976 the popular author Grace Halsell published Los Viejos: Secrets of Long Life from the Sacred Valley, about her experience living in Vilcabamba for a year. (Earlier in her career, Halsell had gained fame with Soul Sister, in which she described pigmenting her skin dark and passing for a year as a black woman. Halsell had also written Bessie Yellowhair, about living among the Navajo for a year.)

Halsell's picturesque account of life in Vilcabamba emphasized the simple virtues of the villager's way of life. She wrote, "I lived in a dirt-floor mountain hut with Gabriel Erazo, who matter-of-factly says, 'I am 132.'" Halsell described how Erazo stayed healthy by composing poetry in his head while hiking in the mountains. She also wrote of 113-year-old Gabriel Sanchez who "climbed the steep El Chaupi mountain to work all day with his crude hoe or lampa, cultivating a small plot of ground."

Halsell concluded that the secret to long life was to stay active: "The viejos apparently do not suffer from bad arteries or heart attacks. I saw no examples of fractured legs or arms. They stay flexible and hardy by a simple rule: Keep moving, don't stop, now or ever."

These books and articles about Vilcabamba led to a sharp rise in tourism to the area. The Ecuadorian government, encouraged by the international interest, decided to increase development of the area. In addition, a Japanese group announced plans to build a health spa and longevity research center in the town. 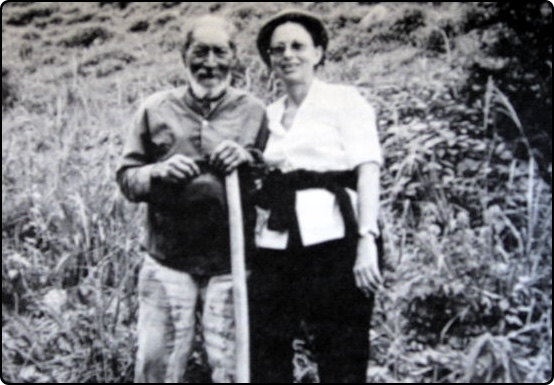 Grace Halsell poses with Gabriel Sanchez, who told her he was 113.

Age Exaggeration
Even as Vilcabamba's international fame grew, scientists continued to investigate the secret of the villagers' longevity, but some were beginning to grow skeptical. In particular, Dr. Alexander Leaf, the Harvard Medical School researcher who had been among the first to conduct research in Vilcabamba, was having doubts. His suspicions were aroused when he realized that the villagers were inconsistent in their self-reported ages. For instance, in 1971 he had met a man who reported his age as 122. When Leaf returned three years later, that same man claimed to be 134 years old. 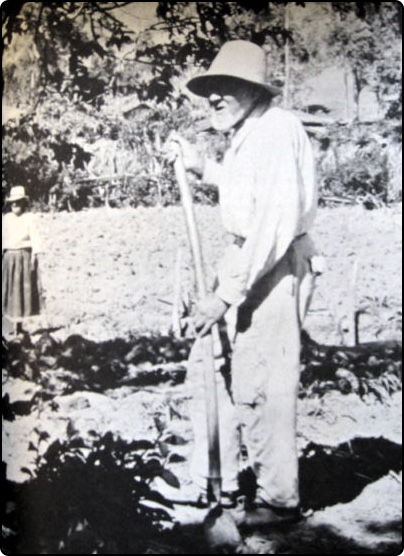 What they found shocked them. In reality, there was not a single centenarian living in Vilcabamba. The oldest person in the village was 96. The average age of those claiming to be over 100 years was actually 86 years. The researchers presented these results on February 27, 1978 at a workshop at the National Institutes of Health in Bethesda, Md.

Far from being a Shangri-la of very old people, the researchers concluded that, "Individual longevity in Vilcabamba is little, if any, different from that found throughout the rest of the world."

Further throwing cold water on the reputation of Vilcabamba, they reported that, "Life expectancy (corrected for exaggeration) at all ages in Vilcabamba (and Loja) is in fact less than in the U.S."


Sources of Error
How had earlier researchers been led so far astray? Mazess and Forman identified two sources of error. First, the villagers systematically exaggerated their ages, and the older they grew, the wilder their exaggerations became. Mazess and Forman provided the example of Miguel Carpio Mendieta (MCM):


Apparently MCM did not begin exaggerating his age until later in life. When he was 61 in 1944 he reported an age of "70", and five years later he was reputedly "80". In 1970, at age 87, he was reputedly "121", while in 1974, at 91, he was "127".
The researchers speculated that the villagers had originally exaggerated their ages in order to gain prestige in the community. This practice appeared to have been occurring for generations, long before academic researchers had arrived in the village. However, Dr. Leaf speculated that the international publicity, and subsequent rise in tourism, may have encouraged the villagers' exaggerations to grow more prolific.

The second source of error was the widespread use of identical names in the small, rather inbred community. This had initially confused researchers who had studied the baptismal and birth records. The birth-date of an identically named uncle or father would appear to confirm the extreme longevity of a resident. By asking the Vilcabambans for the names of their godparents, the researchers were able to identify the correct records for each resident.

It turned out that Vilcabamba did actually have a higher-than-normal percentage of elderly people. However, this was caused by migration patterns. Young people tended to move out of the area, while the elderly moved in.

Although the Vilcabambans did not enjoy greater longevity than the rest of the world, they did have one consolation. Researchers noted that the Vilcabamban lifestyle, which included hard work in a high altitude combined with a low-calorie, low-animal-fat diet, did keep the villagers healthy and vigorous in their old age.


Controversy
Vilcabamba.org, an English-language website designed to promote tourism to Vilcabamba, continued to claim that the residents of the region enjoy unusual longevity (as of 2008 — but as of 2016, when I most recently checked, the site had been abandoned — archive.org cache). It described Vilcabamba as the "Valley of Longevity" and offered the tag line: "Where years are added to your life..... and life is added to your years!" 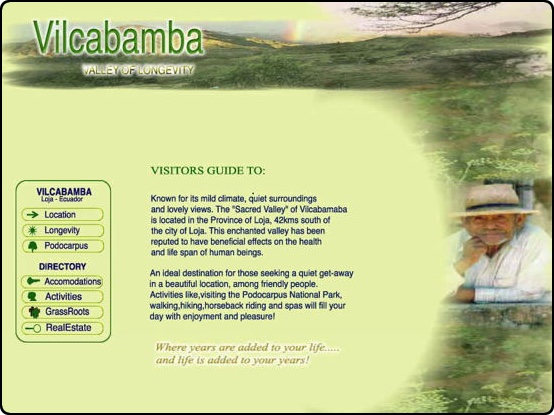 The site offered a number of different theories to explain the supposed longevity of the Vilcabambans. For instance, it referred to Japanese researchers who found that the air in the region was charged by negative ionization: "'The 'old men' live many years in Vilcabamba because they breath this pure air that produces a 'chelating' effect on their bodies', concluded the Japanese."

The site also referred to gerontologist Morton Walker, who, during research conducted in 1982, apparently discovered that the "perfect mineral balance found in the drinking water" produced a "chelating effect" which promoted longevity. The site also referred to French researchers who linked this "chelating effect" to the ideal climate of the valley.

Links and References
Hoaxes of the 1970s Anthropology
Tweet

I've never read about his before, I myself coming from Bolivia and brazil in south America.. But there is a similar tribe in the jungle chapare of Bolivia where I met people 2 yrs ago who told me they where over 100.. I never really looked into it properly, but the ppl in the jungle in Bolivia are usually uneducated and therefore probably loose track of their own age?
Loljust a thought !
Posted by MaYa Veritas Shaw  in  UK  on  Mon Apr 16, 2012  at  12:35 PM
Just because they are uneducated does not mean they are stupid. I know and have met people in parts of Mexico who are well over 100 years old. They have documentation and family members to support it. Unfortunatly if it does not fit commonly- accepted "science" of human longevity, it is discounted as exageration.
Posted by Victor  on  Wed May 02, 2012  at  11:25 AM
I can understand how this confusion can occur.My Grandfather would regularly astound us with his age and it wasnt until we realised that his love of the game of darts meant that when asked his age he would bellow 'One Hundred and Eighteeee'
Posted by Mr Hanky  on  Sun Mar 31, 2013  at  04:30 AM