The Honolulu Star-Bulletin ran a story about the discovery of an ancient Viking ship in a sandstone quarry near Waimanalo, Oahu. The article was written in a tone of absolute seriousness, discussing details of the ship such as its dimensions and objects found alongside it. The only clue that the article wasn't entirely serious came at the end, when it was revealed that the letters A—R—FJOL—E. had been found inscribed on the stern of the vessel. Lest this was too subtle, the article noted that, "Its equivalent in English is APRIL FOOL." 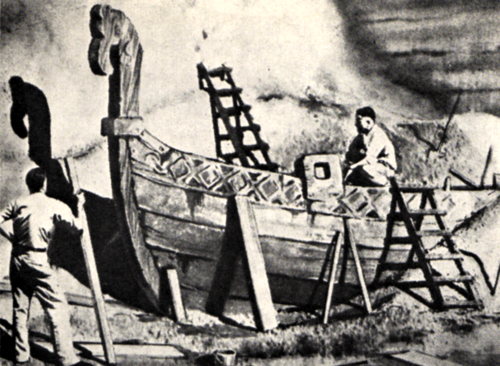 "The only photograph in existence of the remains of the ship attributed to ancient Norse sea rovers. Found in a sandstone quarry near Waimanalo, Oahu. Discovery of the remains is believed by Dr. Thorkel Gellisson, scientist, to upset the theory that the Spanish first discovered Hawaii, and tends to prove that the Japanese junk which legend says was wrecked on these shores in the 13th century was, in fact, this Viking ship. — Star-Bulletin photo.

Norsemen Here Before the Time of Juan Gaetano? Dr. Thorkel Gellisson, Visiting Archaeologist, Tells of the Discovery of Vessel's Timbers In Sand Pit

(By Special Wireless)
NEW YORK, April 1. — Officials of several prominent scientific organizations awaited a formal report by Dr. Thorkel Gellisson today before commenting on the reported discovery of the remains of an ancient Norse longship near Honolulu.

Interest was intense, however, and they readily admitted that a favorable report by Dr. Gellisson, because of his international reputation, would prove the ship's authenticity beyond doubt.

(By Special Wireless)
OSLO, Norway, April 1. — Reports of the discovery of a Norse ship at Honolulu created a sensation in Norwegian scientific circles today.

Dr. Axel Gulbrandsson, curator of the Norwegian Institute of Archaeology, telegraphed Dr. Thorkel Gellisson, a fellow of the institute, who reported the discovery:

By HOWARD D. CASE
Mystery as ancient as the Norseland sagas of a thousand years ago shrouds the uncovering of remains of a Viking longship in a little used sandstone quarry near Waimanalo.

The discovery, made by workmen employed by a Honolulu contractor, is regarded by the few local scientists who have heard of it as challenging the accepted theory of the discovery of the Hawaiian islands.

A preliminary scientific survey of the remains appears to prove beyond doubt that roving Norsemen landed on the shores of Hawaii long before the arrival of Juan Gaetano, the Spanish explorer and navigator.

It may also prove that the "foreigners with light complexions and bright eyes" who, according to tradition arrived here in the 13th century were, in truth, Viking rovers from the far northland and not the crew of a Japanese junk.

These Norsemen, if such they were, may have been the first Europeans ever to enter the Pacific area.

The remains of the Viking longship, or dragonship, have been identified as such by Dr. Thorkel Gellisson, archeologist with the Royal Society of Northern Antiquaries of Oslo, Norway, who has been here several weeks sketching edged weapons in the Honolulu Academy of Arts collection.

Dr. Gellisson was one of the first scientists to be notified of the Waimanalo discovery. He has definitely recognized the remains as those of a longship of the ancient Vikings very similar to the one found at Gokstad, near Sandefjord on the fjord of Christiania.

Dr. Gellisson is of world wide repute. It will be recalled that he deciphered the ancient inscriptions on the Babylonian papyrus discovered in 1933 at Keirttoh, Mesopotamia, and has more recently figured as the leader of the archeological expedition which uncovered the ruins of the ancient Aztec metropolis of Xaohgib, in southern Mexico.

Removal of a large block of sandstone at the Waimanalo quarry revealed a long and wide hollow beneath, and as other blocks were taken out the rotted timbers forming what remained of the hull of the Viking ship were uncovered.

Science Is Called In

The workmen, sensing they had found something of genuine value, notified their employer who, after viewing the longship's remains, communicated with local scientists, including Dr. Gellisson.

At the request of Dr. Gellisson extreme care was exercised in completely exposing the remains. So secretly was the matter dealt with that it was not until today that official announcement of the discovery was made. Nearly two weeks were required in clearing out the pit in which the Viking ship had rested for so many generations.

Great care was taken by workmen under Dr. Gellisson's direction in sifting all of the sand surrounding the longship's remains and many interesting discoveries resulted, further substantiating the identity of the craft.

Approximately one quarter of the longship was found intact, including the stern with its towering and elaborately carved figurehead — the object which had first attracted the attention of the workmen. The remainder of the hull was little more than bits of timber, although the ship's shape and length were easily discerned.

Apparently it had been about 78 feet long, with a beam of about 16 feet and a depth of approximately six feet. It was built of overlapping planks of oak, hand hewn, fastened together by wooden pins with here and there braces of iron bands and rudely fashioned rivets.

Remains of benches, obviously seats used by rowers, indicated according to Dr. Gellisson that the longship pulled 32 oars, 16 to a side. Near the center was what remained of a series of crosspieces obviously used to support a mast. Search was made for traces of a mast but nothing was found.

Also discovered was the broken wooden blade of what was apparently the rudder, or steerboard, from which the term starboard of modern maritime usage was derived.

An outstanding find, other than the ship itself, was a badly corroded sword with an iron blade which had steel edges — unmistakably the work of a Viking smith.

The weapon measured four feet and three inches from tip of blade to end of hilt, and the blade itself was approximately two inches wide. The hilt of the sword had apparently been fashioned from a series of thick leather rings. Beneath the iron hand guard and wrought into the blade was a small square of silver bearing an inscription which, according to Dr. Gellisson, indicated that one Valthiof the Pilgrim was either the owner or maker of the weapon.

Careful screening of the loose sand in the pit brought to light numerous small objects, most of them so badly corroded that their use was problematical.

Bits of iron, which were little more than rust flakes, a badly battered drinking horn and a portion of what might at one time have been a cap or helm of thin iron, pointed toward the Viking origin of the ship.

Dr. Gellisson held to be of outstanding significance the finding of about a quart measure of pieces of charred firewood which, in his opinion, indicated those aboard the longship were alive at landing.

There were also several badly split pieces of walrus tusk and part of the jaw of a fur seal, evidently proof that the route taken by the Viking ship was from the north, probably through the Bering sea and down the coast of Alaska — a channel that for centuries was believed a myth although mentioned in ancient Norse sagas.

Ten Centuries Ahead of Bolsheviks

If this was the channel, the hardy Vikings of old had antedated by 10 centuries the Soviet explorers who, in 1934-35, sailed across the "rim of the world" from European Russia to the Siberian coast through the Arctic waters.

Strangely enough, says Dr. Gellisson, the Russians have an ancient legend that in the late ninth or early 10th century one "Valthiof-sky" — obviously a Slavic version of the name Valthiof — after raiding the Baltic shores sailed off into the unknown north and more than a year later was reported in the Arctic. His Viking ship then vanished.

Several fairly well preserved fragments of oak to which adhered small pieces of rusted iron indicated the presence of casks or barrels in which the Viking farers carried supplies of water and food.

The drinking horn and several of the larger pieces of metal screened from the pit are to be given the electrolytic treatment used on relics from Pompeii in an endeavor to restore any inscriptions on them.

Absence of skeletal remains in or about the longship was not unusual, Dr. Gellisson explained. If there were such remains they had long since crumbled to dust, he said, adding it was probable that if those aboard the vessel were alive when it landed they wandered inland and were either assimilated or killed by the natives.

One feature of the discovery which is puzzling Dr. Gellisson is the name of the craft. Once deeply carved in an oaken plank at the stern beneath the figurehead, but now nearly obliterated by time and the elements, are the letters A—R—FJOL—E.