Searchguild, a search-engine optimization company, debuted Undergoos.com, a Google parody. The Undergoos site claimed to allow internet users to search for and organize underwear. It had the motto: "Underwear by Google - Supporting 8,058,044,651 bosoms."


About UnderGoos
Maximise your comfort and user experience with UnderGoos. Our staff aren't shy, even Sergey's been trying out both the mens and ladies ranges. Google has spotted a chance to bring our unique innovation to yet another underserved market.

Just like our original motto "Just search", everything we do at UnderGoos is "Just pants" (yes, we know that's not strictly true but it's an ethos thing). All of our underwear was carefully selected using PageRank(TM) (a uniquely democratic measure of how attractive Larry finds the model wearing them).

UnderGoos unique solutions help to organize the world's sock drawers
Ever wondered why you always get an odd sock out of the wash? So have we but have you ever wondered why nobody sells odd socks to make up the set? We did. At UnderGoos you can buy our unique "Odd Socks" (available in packets of two) to solve problems such as this. 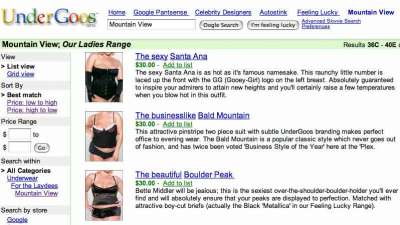