On 10 February 1880, an article ran in the Daily Times (of Bethlehem, Pennsylvania) describing a remarkable invention recently demonstrated by a local inventor, Dr. H.E. Licks. The invention allowed images to be transmitted by telegraph. In other words, it resembled what people today would recognize as a television. However, Licks called his invention a "diaphote," from the Greek dia meaning "through" and photos meaning "light". 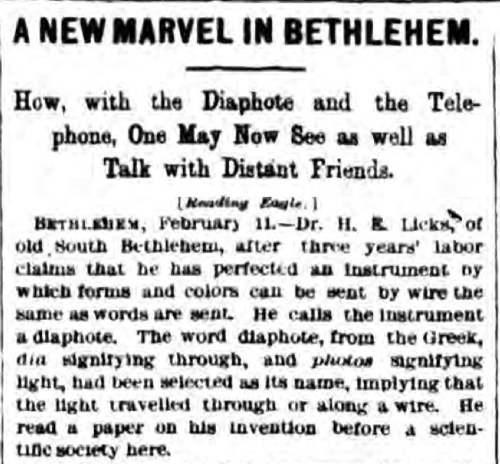 The Diaphote. This is the name of another wonderful discovery of the 19th century, by means of which people can see by telegraph. What next?

The instrument consists of a receiving mirror, the wires, a battery, and a reproducing speculum. The receiving mirror is an amalgam of selenium and iodide of silver; the reproducing speculum is a compound of selenium and chromium. The wires are numerous, as it is necessary to distinctness that a wire should be required to affect but a very small space. The instrument also has a mirror six inches by four, composed of seventy-two small plates, to each of which a wire is attached, the whole being wrapped by a fine insulated covering. These wires run to a common galvanic battery, and thus connect with the reproducing plate. When the circuit is closed, the rays of light are conducted through an ordinary camera, and the accompanying heat produces chemical changes in the amalgam of the mirror, which, modifying the electric current, cause similar changes in the reproducing speculum. The invention is looked upon as one of the most wonderful of the present day.
While it might seem to us that entertainment would be an obvious application of a television-like device, newspapers at the time focused on other applications, such as the diaphote's possible use in the railroad industry. The Iola Register (Iola, Kansas -- March 5, 1880) noted:


It is claimed by the inventor that with this instrument, fitted up with glasses and wires, a signal officer on a railroad will be able to see one hundred miles of track at one time. 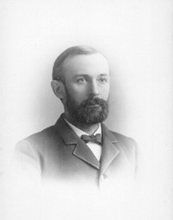 Mansfield Merriman
Despite the excitement it generated, the diaphote turned out to be a hoax. However, it wasn't until 1917 that "Dr. H.E. Licks" revealed the hoax in a book, Recreations in Mathematics. Licks himself is believed to have been the pseudonym of Mansfield Merriman (1848-1925), a professor of engineering at Lehigh University. This identification is due to the research of André Lange, Col. G.L. Sicherman and J.A. McLennan.


Postscript
The diaphote hoax inspired a sequel, the telephote hoax, descriptions of which appeared in newspapers a month later (March 1880). The Telephote was said to be the invention of the Connelly Brothers and Mr. T.J. McTighe. It supposedly allowed people to see each other as they talked on the phone. That is, it was a videophone.

Although these devices (the diaphote and telephote) were hoaxes, inventors of the time really were actively trying to develop technology to transmit images via telegraph. As early as the 1860s, Giovanni Caselli had developed a primitive fax machine which he called the "pantelegraph" that could transmit simple static images. Other inventors steadily improved on the technology, producing devices with names such as the "telediagraph" and the "electrolytic telectrograph".

Diagram of a device for transmitting images via telegraph, from 1907

It was in 1907 that the first steps toward television technology emerged when Russian scientist Boris Rosing used a mirror-drum scanning device to transmit images of geometric shapes to a cathode-ray tube receiver. But it's Scottish inventor John Logie Baird who's credited with producing the first true television when, in 1926, he used a scanning-disk system to transmit a recognizable image of a human face.

The so-called "Baird" televisor was invented in 1884 by German inventor Paul Gottlieb Nipkow. Code disks used to detect the rotation of shafts are called "Nipkow disks" to this day.