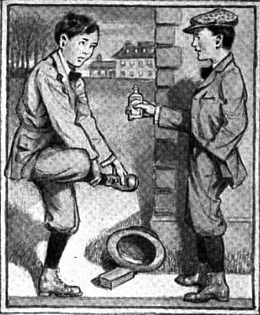 
Did anybody ever see one pass by an old hat on the sidewalk, without giving it a kick? We do not believe such a thing ever happened. Well, a wag seized upon this characteristic, out of which to make a little amusement, on all fools' day. He procured a boulder of some twenty pounds or more, and laying it on the sidewalk, placed it over an ancient weather beaten hat. The first person who passed that way was a jolly, rollicking young man, who went whistling "Jordan is a hard road to travel;" as he came opposite the hat, so temptingly in his way; he gave it a rousing kick, expecting of course to see it go skiving into the street. But it didn't move, and he picked up his toe in both hands, hopped about, and became emphatic in his language, in a manner that made the perpetrator of the joke dodge around the corner. A moment after a gentleman came that way with a cricket club on his shoulder; he brought it down with a swoop against the hat, expecting to see it take a hoist over the lamp-post on the adjacent corner. But it didn't, while the cricket club as it run against the stone, flew half way across the street, and the striker fell to dancing about, blowing his fingers as if they were cold, and using a good many words not found in any religious work of the day. We staid long enough to see a dozen or more assaults perpetrated on that old hat that concealed the boulder, and every time the attacking party got the worst of the bargain.
April Fool's Day Hoaxes by Freelance Pranksters American April Fool's Day Hoaxes April Fool's Day in the 1850s April Fool's Day Street Pranks The April Fool's Day "Brick in a Hat" Prank
Tweet