An article published in 1874 described a man who invented "solar armor." The armor counteracted the heat of the sun, cooling the wearer more the hotter it grew outside. The invention worked so well that it caused a man to freeze to death in the middle of the Nevada desert during the Summer. Accounts of this remarkable invention appeared in papers throughout America and Europe. However, the story wasn't true. It was the satirical creation of Nevada writer Dan de Quille. 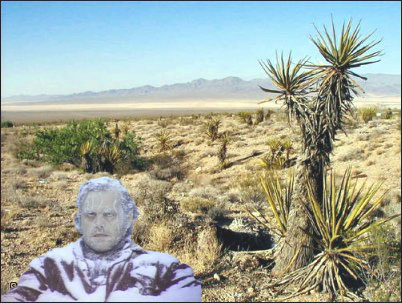 The Article
The article about solar armor first appeared in Nevada's Territorial Enterprise on July 2, 1874. It soon was reprinted in other publications including the San Francisco Examiner (July 7, 1874), the New York Times (July 10, 1874) and Scientific American (July 25, 1874). The text of the article follows:


SAD FATE OF AN INVENTOR (SOLAR ARMOR) — A gentleman who has just arrived from the borax fields of the desert regions surrounding the town of Columbus, in the eastern part of this State, gives us the following account of the sad fate of Mr. Jonathan Newhouse, a man of considerable inventive genius. Mr. Newhouse had constructed what he called a "solar armor," an apparatus intended to protect the wearer from the fierce heat of the sun in crossing deserts and burning alkali plains. The armor consisted of a long, close-fitting jacket made of common sponge and a cap or hood of the same material; both jacket and hood being about an inch in thickness. Before starting across a desert, this armor was to be saturated with water. Under the right arm was suspended an India rubber sack filled with water and having a small gutta-percha tube leading to the top of the hood. In order to keep the armor moist, all that was necessary to be done by the traveler, as he progressed over the burning sands, was to press the sack occasionally, when a small quantity of water would be forced up and thoroughly saturate the hood and the jacket below it. Thus, by the evaporation of the moisture in the armor, it was calculated might be produced almost any degree of cold.

Mr. Newhouse went down to Death Valley, determined to try the experiment of crossing that terrible place in his armor. He started out into the valley one morning from the camp nearest its borders, telling the men at the camp, as they laced his armor on his back, that he would return in two days. The next day, an Indian who could speak but a few words of English came to the camp in a great state of excitement. He made the men understand that he wanted them to follow him. At the distance of about twenty miles out into the desert , the Indian pointed to a human figure seated against a rock. Approaching, they found it to be Newhouse still in his armor. He was dead and frozen stiff. His beard was covered with frost and - though the noonday sun poured down its fiercest rays - an icicle over a foot in length hung from his nose. There he had perished miserably, because his armor had worked but too well, and because it was laced up behind where he could not reach the fastenings.
Skepticism
Eventually the story crossed the Atlantic and appeared in the London Daily Telegraph on August 3, 1874. There it was greeted with some skepticism. The Daily Telegraph wrote:


A curious story reaches us from Virginia City, which, to quote transatlantic phraseology, is the "last new thing in the town line" that the young State of Nevada has produced... The Virginia City Enterprise tells us that a Mr. Jonathan Newhouse, being a man endowed with considerable inventive faculties, devised what he called a "solar armor," which he proposed to don before taking to the alkaline plains... Clothed in this strange outfit, Mr. Newhouse set out from Virginia City for a place called "Death Valley," which, if this story be true, has more than ever earned the name that it bears...

The marvelous stories which come from "the plains" are apt to be received with incredulity by our transatlantic kinsmen who dwell upon the Eastern seaboard of the United States. We confess that, although the fate of Mr. Newhouse is related by the Western journal au grande serieux, we should require some additional confirmation before we unhesitatingly accept it. But everyone who has iced a bottle of wine by wrapping a wet cloth round it and putting it in a draught must have noticed how great is the cold that evaporation of moisture produces. For these reasons we are disposed to accept the tale from Virginia City in the same frame of mind which Herodotus, the Father of History, usually assumed when he repeated some marvel that had reached him—that is to say, we are neither prepared to disbelieve it wholly nor to credit it without question.
Authorship
The story was the work of William Wright (better known as Dan De Quille), one of Nevada's most popular writers during the nineteenth century, and colleague of Mark Twain at the Territorial Enterprise. (In the 1860s many considered it was De Quille, not Twain, who would go on to literary stardom.)

The mention of his 'Solar Armor' hoax in the Daily Telegraph (which, at the time, boasted the largest circulation of any daily paper in the world) inspired De Quille to pen an update to the case of Mr. Newhouse, which he published in the Territorial Enterprise on August 30, 1874:


We are glad that the Telegraph has given us the opportunity, long awaited, of publishing in detail the sequel to the curious affair... A fortnight after our account of the sad affair was published, we received a letter in regard to the matter from one David Baxter, who states that he is Justice of the Peace and ex officio Coroner at Salt Wells, a station in Inyo County, California, situated at the head of the Sink of Amargosa River, at the north end of Death Valley. Mr. Baxter states that he held an inquest on the body of the deceased, Newhouse, in due form, and that the verdict rendered was as follows: "We find that the name of the deceased was Jonathan Newhouse, a native of Knox County, Ohio, aged forty-seven years; and we further find that deceased came to his death in Death Valley, Inyo County, California, on the 27th day of June, A.D. 1874, by being frozen in a sort of coat of sponge called a 'solar armor,' of which he was the inventor and in which he was tightly laced at his own request, said 'solar armor' being moistened with some frigorific mixture, with the precise nature of which we are unacquainted."

Mr. Baxter further states in his letter that he had before him as witnesses the men stopping at the camp on the borders of Death Valley where Mr. Newhouse was last seen alive. These men produced what Mr. Baxter had not before heard mentioned, namely the carpetsack of deceased, which he had left at their camp. In this was found, besides a few light articles of wearing apparel, several bottles and small glass jars containing liquids and powders or salts of various kinds, with the nature of the most of which no person in the settlement was acquainted. One of the largest bottles was labeled "Ether," known to them to be a very volatile liquid and capable of producing an intense degree of cold by evaporation...

Mr. Baxter is firmly convinced that with these chemical, either alone or diluted with water, the degree of cold was produced which caused the death of the unfortunate man. he thinks that in his attempts to reach the fastenings of his armor, on his back, when he began to experience a painful degree of cold, he unavoidably compressed the india rubber pouch and thus constantly ejected more and more of the freezing fluid into the headpiece of his armor. As he stiffened in death, his arm, under which the sack was suspended, naturally pressed more strongly upon his side and thus caused a steady flow of the fluid. Mr. Baxter is of the opinion that the frost and icicle found on the beard and depending from the nose of deceased were formed from the water mingled with the more volatile fluids comprising the frigorific mixture...

Viewed in the flood of light which Mr. Baxter throws upon the strange death of Mr. Newhouse, we think there can be but one opinion in regard to it; which is, that he fell a victim to a rash experiment with chemicals with the nature of which he was but imperfectly acquainted.

In conclusion, it only remains for us to state that Mr. Baxter informed us that it was his intention to send the bottles and jars of chemicals to the Academy of Sciences at San Francisco; also, the solar armor, in case he could recover it. Whether or not he has done so we cannot say. For several weeks we have closely watched the reports of the proceedings of the learned body named, but as yet have seen no mention made of either the chemicals or the armor.