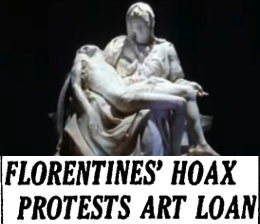 Thousands of people in Florence, Italy came out to see the famous Pieta statue by Michelangelo driven through the city in the back of a truck. A poster on the truck declared that the statue, which normally resided in the Vatican City, had been "taken from Rome by Florentine artists so it won't be shipped anywhere."

The Florentine artists were angry at Pope John XXIII's decision to allow the Pieta to be temporarily moved to the United States where it would be on display at the 1964 World's Fair in New York.

The people lining the streets applauded the truck and the brazen theft of the statue, since there was a lot of popular anger at the decision to allow the artwork to leave Italy. The artists urged everyone to sign a protest petition registering their discontent.

But when the truck stopped before the cathedral in the city, it could be seen that the statue was actually only a plaster cast of the Pieta. It had been made years before by a Florence company.

The real Pieta was still in Rome and was later shipped to New York, as promised, where it was displayed at the World's Fair. It was subsequently safely returned to Italy.
April Fool's Day Art Hoaxes Italian April Fool's Day Hoaxes April Fool's Day, 1962
Tweet