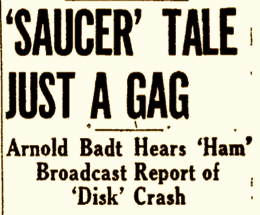 The Honolulu Star-Bulletin reported that a flying saucer had crashed into the side of the Punchbowl crater on the island of Oahu. Scandinavian scientist Dr. Thorkel Gellison (who had been a recurring character in the Star-Bulletin's April Fool's Day stories for the past fifteen years) was said to be on the scene investigating.

The article (and accompanying picture) was obviously farcical, but it unintentionally caused confusion thousands of miles away after a ham radio operator in Hawaii — who apparently believed the story to be real, and who was identified only as a man who "spoke English with a Chinese accent" — broadcast that a "disk" 30-feet in diameter had crashed into a mountainside on the island. This broadcast was heard in Michigan by amateur radioman Arnold Badt.

Badt frequently passed on stories he heard over the radio to his local paper, the Herald-Press, and so he informed them of this report. The staff at the Herald-Press recalled that the most recent issue of U.S. News and World Report had speculated that the flying saucers being seen throughout the country were actually models of a revolutionary type of aircraft being tested by the U.S. Navy. So they theorized that the Hawaiian saucer crash might be a downed Navy plane. They were about to print this as news, but they first queried the AP about the story, who in turn queried their office in Hawaii, which reported back that the Star-Bulletin's story was an April Fool piece. [The Herald-Press (St. Joseph, Michigan), Apr 4, 1950.] 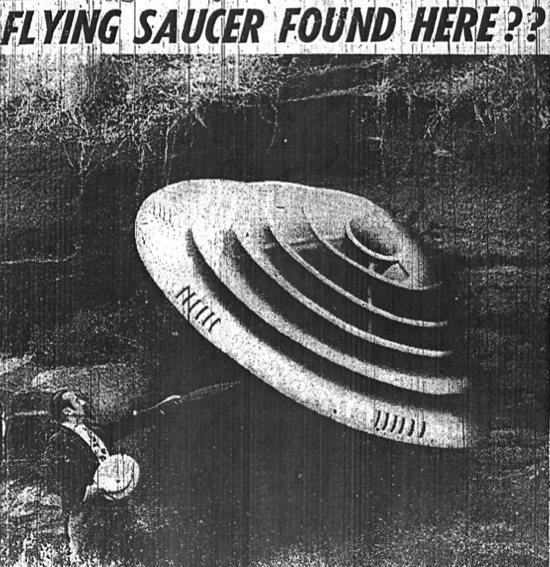 A flying saucer has crash-landed on the slopes of Punchbowl, The Star-Bulletin was told today.

Dr. Thorkel Gellison, noted Scandinavian scientist and president of the Loof Lirpa society and the Srail club, gave the momentous word to the world in an exclusive interview with the Star-Bulletin.

He defied the police, army, navy and air force to reveal the news which rocked official Washington to its heels.

A 14 plane glider convoy is carrying every nuclear scientist and outer space expert within the Pentagon to Honolulu for an exhaustive inquiry, he said.

HIS AID IS ASKED
Local authorities, clamping a deep lid of secrecy on the situation, immediately invoked the aid of Dr. Gellison, who has wintered in Hawaii for many years.

Dr. Gellison alone was admitted to the scene of the saucer crack-up.

But an alert Star-Bulletin photographer, B.R. Trebe, slipped through the uniformed ranks of guards and managed to get an exclusive picture of the saucer and an interview with Dr. Gellison.

"This," said Dr. Gellison, "is unique in my experience. But I have no doubt this is a saucer of some kind.

"When I was last at the experimental arsenal at Wedgewood I saw similar designs on other saucers, most of which have not flown except in fits."

UPLIFT RESEARCH
Dr. Gellison, it will be recalled, is noted for his research in the field of scientific uplift, for which he has been awarded the supreme star of the diamond horseshoe.

Dr. Gellison is the man who dug up the ancient Viking vessel out of the sands of Waimanalo.

This caused a sensation in the archaeological world. The dispute it aroused has not yet died down.

First inquiries at the crash scene shed only a blue light on what occurred.

Anderson J. Gibloof, a nearby resident, was able to report that he heard a loud humming noise, saw a blue light flashing through the murky dawn sky, then heard a crash on the hillside.

RUSTLING IS HEARD
Rushing to the scene, Mr. Gibloof found no signs of life, but heard a rustling in the distance, as though small bodies were beating through the koa haole underbrush.

He immediately spread the alarm.

Dr. Gellison's only answer to that was: "He may have heard some little men that weren't there. Certainly the only little men I saw when I got there weren't there any more.

"The whole thing about the circular saucer is baffling in a roundabout way. Not since I unrolled the papyrus at Kcirttoh, Mesopotamia, has anything occurred to cup the climax quite as thoroughly."

BACK TO WORK HE GOES
Unhindered, solitary against the bleak slopes of Punchbowl, Dr. Gellison bent to his work.