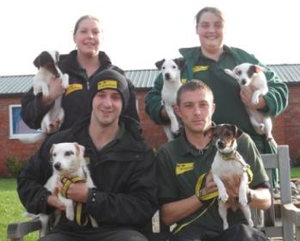 The Dogs Trust charity announced it was specially training dogs to fit the needs of left-handed owners. It was doing this by "reprogramming" the brains of the dogs to stop them from pulling to the right and entangling their leftie masters in the leads while on long walks. It was using a method of training known as "Polar Foil" developed to stop Huskies veering off course in the Arctic, but never before used to train domestic animals

Dogs Trust noted it was doing this in order to comply with the "European Commission's equality directive, detailing equal opportunities for left handed citizens."