On August 10, 1942, the U.S. Army's public-relations office released a statement informing the press that fliers for the First Ground Air Support Command had discovered "secret markers" in rural areas of the east coast. These markers, apparently placed by fifth-columnists, appeared innocent from the ground but acquired a sinister meaning when viewed from the air. From an aerial perspective they formed arrows "aimed directly at airplane factories and airfields." The purpose of these markers, Army intelligence believed, was to guide Nazi bombers straight toward targets of military significance.

The Army simultaneously released three pictures showing these markers. One marker appeared in a tilled field. The fallow land was darker than the tilled sections and approximated the outline of an arrow. A second marker was formed by sacks arranged in the shape of the number "9". The tail of the 9 pointed toward a nearby airplane factory. The third marker was in a woodland area where a lane led to a V-shaped clearing. 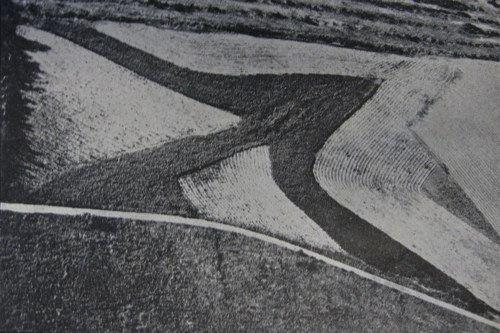 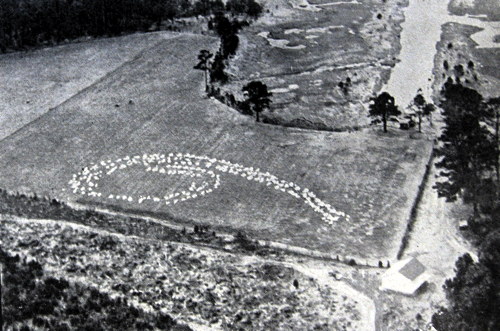 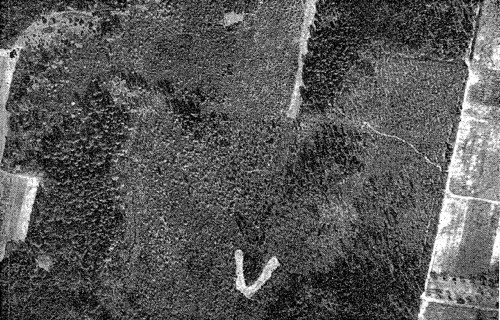 Col. Dache M. Reeves said that the markers had been investigated by intelligence officers of the First Air Force, and that they had been eradicated and there was "proper action taken." The exact location of the markers was not given. They were only described as being in the eastern part of the United States. They were cited as being "clear instances of how enemy agent or sympathizers sowed into peaceful farmlands potential devices to aid destruction."

The discovery of the air markers received widespread press coverage, making front-page headlines in all the major papers throughout the United States, including the New York Times, Washington Post, and Los Angeles Times. Editorials warned of the need to be on the alert for treachery at home. 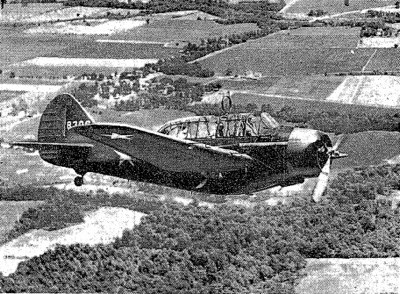 An O-47, the type of observation plane that would have been used to spot the markers.

But within a day the markers went from being a menace to an object of mockery.

The Washington Star, curious to learn more, made some inquiries and immediately discovered that the markers had been investigated by Army officials months before and had been determined to have no military significance. Even worse, as the Star noted, "the same story, with an alteration here and there — and sans pictures, was distributed from the same source in June, and published in Sunday feature sections. At that time, however, the pictures of the 'markers' were withheld as 'military secrets.'"


The Origin of the Markers
Far from being sinister signs left by Nazi sympathizers, the markers turned out to have been entirely innocent patterns on the ground — in two cases made under the direction of the U.S. Government itself.

The number 9 had been made by fertilizer sacks dropped from a moving truck on the farm of C. Russell Bull at Kiptopeke, Virginia. Mr. Bull served as senior air raid warden for his region. Mrs. Bull was quoted as saying that military officials had visited their farm in March and called attention to the figuration of the fertilizer sacks, but had left after the layout was rearranged by her husband. She also noted that, "We've been drying bags that way for years. They are just thrown off a moving truck and it was only a coincidence that they happened to fall that way."

The plowed-field marker was located on the farm of Thomas Kane, near Freehold, N.J. It had been created four years earlier under direct supervision of the soil-erosion bureau of the Department of Agriculture.

The V-shaped clearing was a feeding ground for birds near Haleyville, N.J. It was one of approximately nine hundred feeding grounds created by the New Jersey Fish and Game Commission in 1937.

The Washington Star concluded that it and other newspapers "were the victims of over-zealous army press-agentry, and as a result, participated unwittingly in what appears to be the great air marker hoax."


Blame
The war department, embarrassed by the revelation, admitted that the story "may be untrue."

The Army press officer found to be responsible for the release of the statement was Major Lynn Farnol. Farnol was a movie press agent who had been commissioned into uniform to serve as a public relations officer. However, he was still running his own business, and apparently wanted good relations with the press. Therefore he sent them what he felt was a good story.

Farnol noted that the press release had been approved by the War Department's information staff. However, it turned out that the information staff had not checked the statement for accuracy. They had merely checked to determine if it violated censorship rules. Seeing that it did not, they gave it their okay.

The Army later announced that the press office would be reorganized so that mistakes such as the "air marker hoax" would not be repeated in the future.

By coincidence, the comic strip Tim Tyler's Luck had featured an "air marker"
a week before the story of the Nazi air markers broke.