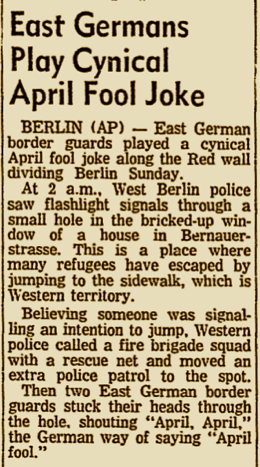 When the Berlin Wall was erected in 1961, it ran along Bernauer Strasse, and consequently the East German border guards bricked up the doors and windows of the houses in this street facing the border. But many people tried to escape by removing the bricks from windows and jumping down into the West.

The first casualty at the Berlin Wall occurred in August 1961 when Ida Siekmann died after trying to escape from the East by jumping from a third-floor apartment window on this street.

On 1 April 1962, West German police saw a light flashing from a partly bricked-up second floor window on Bernauer Strasse, and they believed it to be someone signalling their intent to escape. So they enlisted the help of firemen and rushed to the house to spread nets beneath the window to catch the person when they jumped. But they were met by three East German guards who stuck their heads out the window and shouted down "April Fool!"